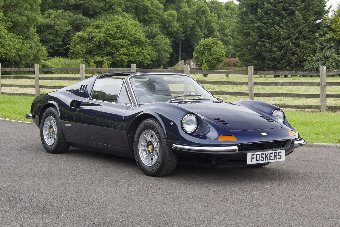 Ferrari has been manufacturing mid-engined sports cars for the best part of 50 years, and all of these Ferraris can all be traced back to one model - the Dino. The Dino marque was intended to apply to all Ferrari-built cars that did not use a V12 engine. It was named after Enzo Ferrari’s son, Alfredo - or ‘Alfredino’ - who had spearheaded Ferrari’s development of the Dino V6 engine for racing.

The marque was launched with the Ferrari Dino 206 GT, which used a lightweight aluminum body and an aluminium block 2.0-litre Fiat-built V6 mounted transversely behind the driver. In 1969, the Dino 246 GT arrived, replacing the expensive aluminium used in its predecessor with a cast iron block 2.4-litre V6 and steel body panels. The 246 GTS as seen here appeared at the 1972 Geneva motor show, with a black targa roof panel that could be easily removed and stowed behind the driver. In total, just 228 right-hand-drive Dino 246 GTS models were imported to the UK between 1972 and 1974. The Dino 246 GTS offered here was ordered on 10th April 1974 and was completed at the factory in July 1974. It was delivered to H R Owen and sold directly to its first owner, who was based inWorcestershire. The current owner purchased the vehicle in July 2005 and has solely used foskers for service and maintenance work to-date. Foskers are please to bring this stunning GTS to market for the second time have just completed its annual servicemaking it ready to enjoy this summer. Download PDF
Back to current stock