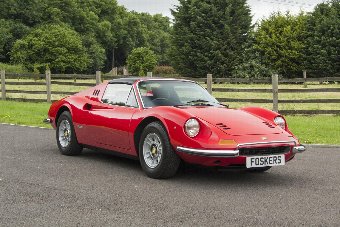 Ferrari’s 46-year history of mid-engined sports cars can be traced back to one model - the Dino. Named after Enzo’s son, Alfredo - or ‘Alfredino’ - the Dino marque was to apply to all Ferrari-built cars that did not use a V12 engine.

The marque was launched with the Dino 206 GT, which used a lightweight aluminum body and an aluminium block 2.0-litre Fiat V6 mounted transversely behind the driver. In 1969, the Dino 246 GT arrived, replacing the expensive aluminium used in its predecessor with a cast iron block 2.4-litre V6 and steel body panels. The 246 GTS appeared at the 1972 Geneva motor show, with a black targa roof panel that could be easily removed and stowed behind the driver. In total, just 228 right-hand-drive Dino 246 GTS models were imported to the UK between 1972 and 1974, with the example here being among the earlier cars to arrive. Download PDF
Back to current stock