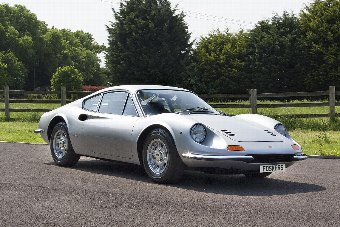 ‘Dino’ is a venerable name in the minds of true Ferrari connoisseurs - and rightly so. The company’s half-century history of mid-engined sports cars can be traced back to the development of one particular road-going model - and one engine, in fact - the V6 Dino.

Following two separate design concepts - the first at the 1965 Paris motor show and the second at Turin in 1966 - the marque was launched with the glorious Dino 206 GT. The first Dino had a lightweight aluminum body and an alloy block 2.0-litre V6 engine, mounted transversely behind the driver. At the end of the short production run, just 152 examples of the 206 GT had been built, which makes it not just the rarest Dino, but the rarest mid-engined production Ferrari of all time. Ferrari launched the Dino 246 GT in 1969, replacing the expensive aluminium used in its predecessor with a cast iron block 2.4-litre V6 and steel body panels. Understandably, the Dino 206 GT remains the model of choice for the most discerning collectors, as the original vision of the lightweight, mid-engined Ferrari.

Most recently, Foskers were presented with the challenge of restoring this Dino 206 GT. A substantial sum has been invested into restoring it back to itsoriginal factory colour, in addition to an expertlyre-trimmed factory specification interior.The engine block is certified by Ferrari Classiche, and a raft of details have been attended to bring the car as close as possible to its original factory finish. Dino 206 GT s/n 00238 is a remarkable car, which benefits from recent restorative works, supported by superb documentation and a complete ownership history from new. This is an outstanding example of one of the most important cars in Maranello’s history. For more information about this Ferrari for sale in Kent, or to arrange an appointment, please contact our sales team on 01474 874555 or 07921 430430. Please see promotionalvideo Download PDF
Back to current stock