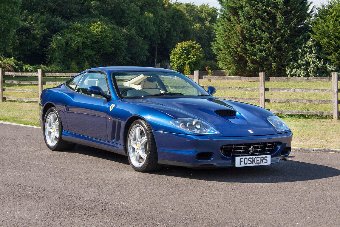 When Ferrari set about evolving the fantastic 550 Maranello, the most significant change they made was to the engine displacement, as referenced by the new name: 575M Maranello. The 5.5-litre V12 was enlarged to 5.75 litres, producing a maximum 515hp - up 30hp on the 550.

Top speed increased from 199mph in the 550 to 202mph in the 575. While the Ferrari 550 was only offered with a manual gearbox, the 575M could be specified with the F1 semi-automatic transmission. Equipped with this gearbox, the 575M is capable of 0-62mph in 4.2 seconds. Ferrari’s 550 and 575M Maranello were the company’s first two-seat Grand Tourers for more than 20 years - since 365 GTB/4 Daytona production wound up in 1973. They are now rightly regarded as wonderful modern classic Ferraris, combining beautiful styling and superb performance with sumptuous cabins. This particular Ferrari 575M Maranello is finished in
Blu Tour de Francewith Crema hide, blue piping and stitching and blue carpets. Another exquisite detail of the interior is the beautiful rear luggage shelf of contrasting Blue hide. The 575M Maranello is becoming more sought after by the week, and this particular car has the best specification we’ve ever seen. It is a magnificent V12-engined Ferrari and represents fantastic value in the current market. For more information about this Ferrari 575M Maranello F1 for sale in Kent, or to arrange an appointment, please contact our sales team on 01474 874555 or 07921 430430. Download PDF
Back to current stock