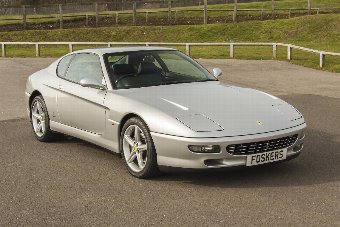 The Ferrari 456 GT was revealed in 1992 at Garage Francorchamps in Belgium, and celebrated as the most powerful 2+2 in the world. Itwas the first road car launched under the auspices of renowned former Ferrari president, Luca Cordero di Montezemolo.

In di Montezemolo’s own words, it was ‘a totally new kind of Ferrari in every sense of the word’. A completely new 5.5-litre Ferrari V12 engine was mated to a six-speed manual transmission, with a sophisticated suspension set-up and and freshly designed switchgear. In 1996, the Ferrari 456 GT four-speed automatic was launched, followed in 1998 by the Ferrari 456M or ‘Modificata’. Updates to the engine management, interior and aerodynamics were added, but performance was unchanged. Generous boot space and a spacious cabin make the Ferrari 456 an ideal family touring car. The sumptuous interior features electrically-adjustable seats, air-conditioning and electric windows. This Ferrari 456 GT is one of just 141 six-speed manual cars imported from Italy by Maranello Concessionaires, and was first registered in May 1995. It is presented in the unusual and striking factory specification of silver (Argento Nurburgring) with blue hide (Connolly leather A4307) and Otranto (light blue) carpets, as well as tailored navy overmats. The car is in superb condition and is presented with outstanding maintenance history, having 20 stamps in the service book. The car is available at the asking price with a choice of wheels - either the 18-inch Ferrari 575M alloys as pictured, or the original set in the 17-inch ''star'' design. This Ferrari 456 GT was first registered in Jersey and was brought onto the mainland permanently in 1997. It has evidently been very well cared for throughout its life, with just five registered keepers on the logbook and a genuine low mileage of only 38,790 miles from new. An excellent example of an early model year car, this 456 GT is equipped with the highly desirable six-speed manual transmission, making it an increasingly sought after car among collectors and enthusiasts alike. An extensive file of invoices and old MOT certificates accompanies the car, and it is complete with the original tan hide tool case, leather owner''s wallet and all of the original factory books. For more information about this six-speed manual Ferrari 456 GT for sale in Kent, or to arrange an appointment, please contact our sales team on 01474 874555 or 07921 430430. Download PDF
Back to current stock