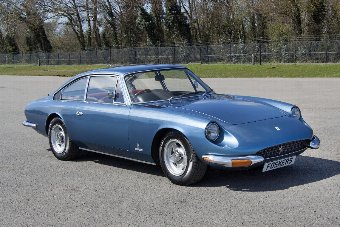 The Ferrari 365 GT 2+2 had its grand debut at the 1967 Paris Salon as the replacement for the popular 330 GT 2+2. Its styling owes much to the rare and wonderful 500 Superfast, with the same elegant oval grille, sweeping nose and fastback profile.

Under the bonnet is a 4.4-litre Tipo 245 Colombo V12, producing some 320hp, which is coupled to a five-speed manual gearbox. A key innovation on the 365 GT 2+2 was the hydropneumatic self-levelling independent rear suspension, developed in conjunction with Koni, which maintains a constant ride height regardless of load. Unlike so many 2+2s, the rear seats of the 365 GT offer genuine comfort in accommodating passengers, with deep cushioned backrests and leather-trimmed armrests. The spacious interior also features conveniences such as air-conditioning and electric windows, with beautiful detailing to the switchgear throughout the cabin. This particular Ferrari 365 GT 2+2 chassis number 12009 was supplied by Maranello Concessionaires to Ross Brothers (Ben Rhydding) Ltd of Ilkley, Yorkshire, and was purchased by its first owner; Mr. I. H. S. Smith in January 1969. The vehicle was supplied with air-conditioning and a spares package. In May 1971 the 365 was purchased by its second owner Mr. N. Ryman of Rickmansworth, Hertfordshire. the history file shows that between 1971 and 1980 the vehicle was shipped to Australia. For the next 24 years Mr. Ryman maintained the vehicle with various dealerships around the New South Wales area until it was purchased by Mr. Kevin Wood from Shannons Corporation Pty Ltd (auction house) in June 1995. Just two years later in 1997 the 365 was purchased by a lady from Perth, Western Australia (AUS) and re-homed the vehicle to the UK in 2009. One year later she commissioned a bare metal respray. The fantastic history file which accompanies this Ferrari 365 GT 2+2 has well-documented evidence of the current mileage, the chain of ownership from new, and the extensive servicing undertaken and repaint in 2009 - not to mention numerous other invoices and MOTs, that show the care and attention that has been lavished upon this vehicle. For more information about this Ferrari 365 GT 2+2 for sale in Kent, or to arrange an appointment, please contact our sales team on 01474 874555 or 07921 430430. Download PDF
Back to current stock