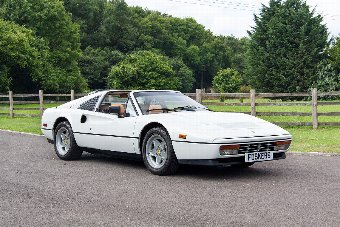 The Ferrari 328 GTS and GTB had their worldwide debut at the 1985 Frankfurt motor show. Its styling is an obvious evolution of the Ferrari 308 series, with Pininfarina’s Leonardo Fioravanti softening his previous design so that it remained a popular choice with the Ferrari aficionados.

Under the engine cover is the same transversely-mounted, fuel-injected V8 engine from the Ferrari 308 Quattrovalvole, with an increase in displacement to 3.2 litres. Performance, handling and road holding are a big step on from its predecessor, although it retains all the benefits of the Ferrari 308’s independent suspension and slick five-speed manual gearbox. Another significant difference over the Ferrari 308 is the use of galvanized steel, which greatly reduces rust problems compared to its forebear. The early models of the 328 have an edge as far as collectability goes, thanks to several interior details, as well as the elegant concave wheel design. In 1988, ABS became available, and these later cars have a redesigned convex wheel to accommodate the system. While the 328 GTS was a runaway commercial success for Ferrari, the number of RHD cars built was less than 10% of the production run. This particular Concourse Winning Ferrari 328 GTS is one of just 250 right-hand-drive models without ABS. The car is presented in ultra rare White with tan hide and beige carpets. This is a fantastic opportunity to purchase a genuine low-mileage, Ferrari Classiche Certified Ferrari328 GTS in wonderful condition and is presentd with a full service history. The displayed mileage of 20,480 miles from new is fully backed up by the stamped service records. For more information about this very specail Ferrari please contact our sales team on 01474 874555 or 07515 430430. Download PDF
Back to current stock