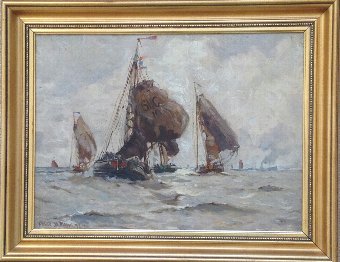 Coverdale Fine Art has 6 antiques for sale.
click here to see them all

This excellent oil on canvas painting signed by the highly distinguished artist, Frank Henry Algernon Mason RBA, RI, RSMA (1875-1965) and dated (18)98, depicts a fleet of herring barges from Scheveningen (Holland) on their way to the fishing grounds. The lead boat is a vessel called Martina built in 1897.

ABOUT THE PICTURETitle: "Martina Leading the Way"Provenance: Signed and dated, acquired from a fine art saleCondition: Excellent in gallery conditionFrame: Wooden gilt frame with inner beading - ready to hangSize: Image Only 29cm x 39cmMason was known to have traveled to Holland in 1898 staying & painting at an artist's atelier, the Hotel Spaander where he met up with artists from the Hague School, including Fred Mayor and Arthur Friendedson; later in 1901 all three were to become members of the Staithes Art Club.ABOUT THE ARTISTFrank Henry Algernon Mason (1875-1965) is a very popular listed artist born in Seaton Carew who settled with his family in Scarborough from 1890. Joined the Staithes Art Group as a founder member in 1901, elected to the Royal Society of British Artists (RBA) in 1904 & elected to the Royal Institute of Painters in Watercolours (RI) in 1929. Belatedly elected member of the Royal Society of Marine Artists (RSMA) in 1961.Exhibited his work widely including the Royal Academy from 1902 onwards. In 1973 there was an exhibition of his work at the National Maritime Museum. 31 of his paintings form part of the national collection held by various museums including Bradford, Dundee, Hartlepool, Scarborough & Whitby. Interest in this artist remains high with an exhibition of his work currently running at the Scarborough Art Gallery until 3rd January 2016. More information can be found on www.frankhenrymason.com

Coverdale Fine Art has 6 antiques for sale.
click here to see them all