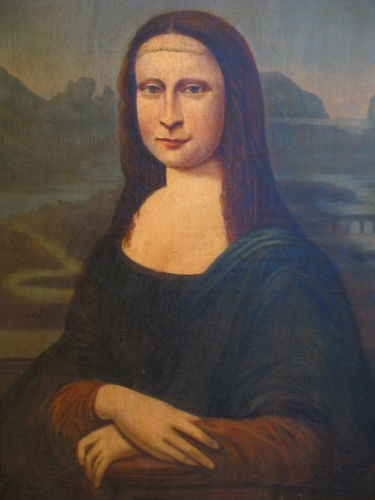 ABOUT THE ORIGINAL MONA LISA
The Mona Lisa (La Gioconda or La Joconde) is a half-length portrait of a woman by the Italian artist Leonardo da Vinci, which has been acclaimed as "the best known, the most visited, the most written about, the most sung about, the most parodied work of art in the world."[1]

The painting, thought to be a portrait of Lisa Gherardini, the wife of Francesco del Giocondo, is in oil on a poplar panel, and is believed to have been painted between 1503 and 1506.[2] It was acquired by King Francis I of France and is now the property of the French Republic, on permanent display at the Musée du Louvre in Paris since 1797The title of the painting that is known in English as Mona Lisa stems from a description by Renaissance art historian Giorgio Vasari, who wrote "Leonardo undertook to paint, for Francesco del Giocondo, the portrait of Mona Lisa, his wife."[4][5] Mona in Italian is a polite form of address originating as ma donna —similar to Ma’am, Madam, or my lady in English. This became madonna, and its contraction mona. Leonardo da Vinci began painting the Mona Lisa in 1503 or 1504 in Florence, Italy.[19] According to Leonardo's contemporary, Giorgio Vasari, "after he had lingered over it four years, left it unfinished".[5] Leonardo, later in his life, is said to have regretted "never having completed a single work".[20]In 1516 Leonardo was invited by King François I to work at the Clos Lucé near the king's castle in Amboise. It is believed that he took the Mona Lisa with him and continued to work after he moved to France.[17] On his death the painting was inherited, by his pupil and assistant Salaì.[9] The king bought the painting for 4,000 écus and kept it at Palace of Fontainebleau, where it remained until given to Louis XIV. Louis XIV moved the painting to the Palace of Versailles. After the French Revolution, it was moved to the Louvre, but spent a brief period in the bedroom of Napoleon in the Tuileries Palace and then finally to the Ingres Museum in Montauban.AESTHETICS
Leonardo used a pyramid design to place the woman simply and calmly in the space of the painting. Her folded hands form the front corner of the pyramid. Her breast, neck and face glow in the same light that models her hands. The light gives the variety of living surfaces an underlying geometry of spheres and circles. Leonardo referred to a seemingly simple formula for seated female figure: the images of seated Madonna, which were widespread at the time. The woman sits markedly upright with her arms folded, which is also a sign of her reserved posture. Only her gaze is fixed on the observer and seems to welcome him to this silent communication. LEONARDO DA VINCI
Leonardo di ser Piero da Vinci (B.April 15 1452 – D.May 2 1519,was an Italian Renaissance polymath: painter, sculptor, architect, musician, mathematician, engineer, inventor, anatomist, geologist, cartographer, botanist, and writer.Born out of wedlock to a notary, Piero da Vinci, and a peasant woman, Caterina, at Vinci in the region of Florence, Leonardo was educated in the studio of the renowned Florentine painter, Verrocchio. Much of his earlier working life was spent in the service of Ludovico il Moro in Milan. He later worked in Rome, Bologna and Venice, and he spent his last years in France at the home awarded him by Francis I.ABOUT OUR PORTRAIT.FRAME
Presented in a good quality later replacement plaster and gilt period style frame.DATE:
Estimated to be late 18th Century European.MEASUREMENTS
HEIGHT 27.75 INCHES (Including Frame)
WIDTH 24 INCHES (Including Frame)
CONDITION:Original canvas with two small well restored patch repairs verso,with some re-touching to painted surfaces,but being clean and with a little craquelature,but fine and stable,ready to hang as seen.TELEPHONE ENQUIRIES 01530 411126 OR 07765 856171
HOURS 10AM -10PM 7 DAYS A WEEK BY APPOINTMENT
DELIVERY UK MAINLAND & WORLDWIDE /QUOTES ON REQUESTOUR REF 0492