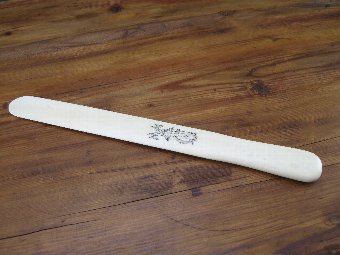 Ball And Claw Antiques has 3 antiques for sale.
click here to see them all

This ivory page turner has a simple but tactile design. One end is lightly rounded and shaped to fit comfortably into the hand whilst the other has a slim and flattened profile for slipping easily between the pages of a large book or folio.

Towards the middle of the page turner is the crest of the 17th Lancers and the monogram A C which may indicate that this was once owned by General Sir Arthur Clifton who was Colonel of the 17th Lancers from 1839 to 1842.The 17th Lancers were formed in 1822 and won three Victoria Crosses at the famous charge of The Light Brigade during the battle of Balaklava in 1854. Because of The Skull and Cross Bones badge and their motto of Or Glory they were frequently referred to as the "Death or Glory Boys". Though for a while they where less glamorously known as Bingham‘s Dandies after Lord Bingham (Lieutenant-Colonel 1826 - 1837) invested a considerable amount of money smartening up the unit with new horses and ornate uniforms.The 17th Lancers were amalgamated with the 21st Lancers in 1922 to become the 17th/21st Lancers. This regiment subsequently became the Queens Royal Lancers in 1993.Dimensions: 45cm x 3cm
Weight: 0.9KgMore pictures and online ordering available at www.ballandclawantiques.com

Ball & Claw Antiques is influenced by multiple people with diverse qualifications, backgrounds and experience so the mix of items we find, restore and sell represent their various interests, passions and skills.
We focus on quality items which even if worn with the rigours of time and use, still capture the imagination or attract the eye with their colours or shape. Some antiques wear their age with ease and carry the age mellowed colour and scars of use without harming their form or use but others are not so lucky. Where necesary and practical we will try to sympathetically restore damaged antiques with minimum intervention so that function or form is restored without harming their natural patination and other signs of age. Sometimes we will restore an item even when it doesnt make financial sense to do so - because sometimes we just cant help but feeling that it deserves to be saved for future generations.

Other antiques available from ball and claw antiques

Ball And Claw Antiques has 3 antiques for sale.
click here to see them all