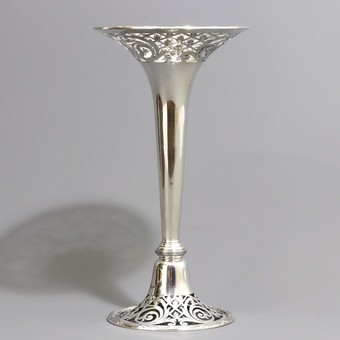 Elegantly styled pierced silver tall trumpet vase by Walker & Hall, Sheffield 1910. Simple lines with pierced design around the rim and foot. Reeded band detail to rim and foot edges. The vase is 25 cm in height. The vase is of a substantial gauge of silver and is 394 grams in weight.
The vase is in excellent condition commensurate with age with exceptionally minor signs of use. Please see images as these form an important part of the description.

The company Walker & Hall was initially founded primarily as a manufacturer of electroplated wares. Following the invention of the electroplating process, Henry Hall (Worcester solicitor and businessman) financed George Walker (a Sheffield cutler) thus founding Walker & Hall in 1845. Differing accounts exist as to George Walker’s contribution to the development of silver electroplating in 1843 – however trading (as Walker & Co with his business partner Samuel Coulson) as an electroplate manufactory between 1843 and 1845. Walker and Hall were listed at the Electro-works, Howard Street, Sheffield as silversmiths and cutlers. Two of Henry Hall’s nephews joined the business in the 1850’s and when (Sir) John Bingham joined in 1852, they had fewer than 20 workers. John’s younger brother Charles became a partner in 1872 and helped grow the manufacturing side of the business. By 1894 the company reported 1500 employees in total. The company under Sir John Bingham was adept at publicity; they appear to be the originators of the story that George Walker was a co-inventor of the electroplating process with a Dr John Wright. Walker & Hall were subsumed into the Clore Group and ultimately into British Silverware Ltd in 1963, and finally shut down as a manufacturer in 1971.The name was later revived as a retail firm.