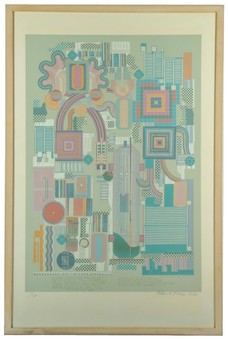 *SEQUENTIAL SET - SIGNED & NUMBERED: 10B - 11B - 12B - 13B - 14B - 15B - 16B - 17B - 18B*Image dimensions approx: 53 x 73 cm (21" x 29" )5 Framed/ 4 unframedFramed prints by ACADEMY FRAMING at THE ROYAL ACADEMY OF ARTS (Picadilly/London).Calcium Light Night Music was a central part of Paolozzis life. From childhood, his daily routine was played out to the familiar, melodic sound of the radio. His father made radios for each room of their house, and Paolozzi later came to listen continuously to music whilst working in his studio.In the early 1970s, after discovering a German magazine illustration rendering organ music into pictorial form, the artist began working on collages to evoke the movement and energy of music. This idea informed the series Calcium Light Night.In this series, Paolozzi has created a visual equivalent of the collage technique employed by the composer Charles Ives, whose compositions fused different genres of music, and layered different orchestral sounds and rhythms through random cues from the conductor. This created a miscellaneous, collaged sound. The grey, black and white fragments of photographically enlarged linear compositions suggest the vibrations, movement and flow of music.The mechanical element of the linear 8 1976. This set contains references to the life and works of Charles Ives. It was begun while Paolozzi was in Berlin in 1974 and printed at Advanced Graphics between 1974 and 1976. It was to have been published by Propylen Verlag, Berlin, but Paolozzi took over the whole edition and published it himself. Paolozzi made imagery related to music and musical notation in this and other works of the mid 1970s. He used a vocabulary of shapes and patterns developed from earlier screen prints through wooden reliefs (especially the ceiling panels for Cleish Castle in Scotland, completed in 1975) and back to prints again in screen prints, wood cuts and etchings
Re shipping, please get in touch beforehand in order that can request an estimate to your destination