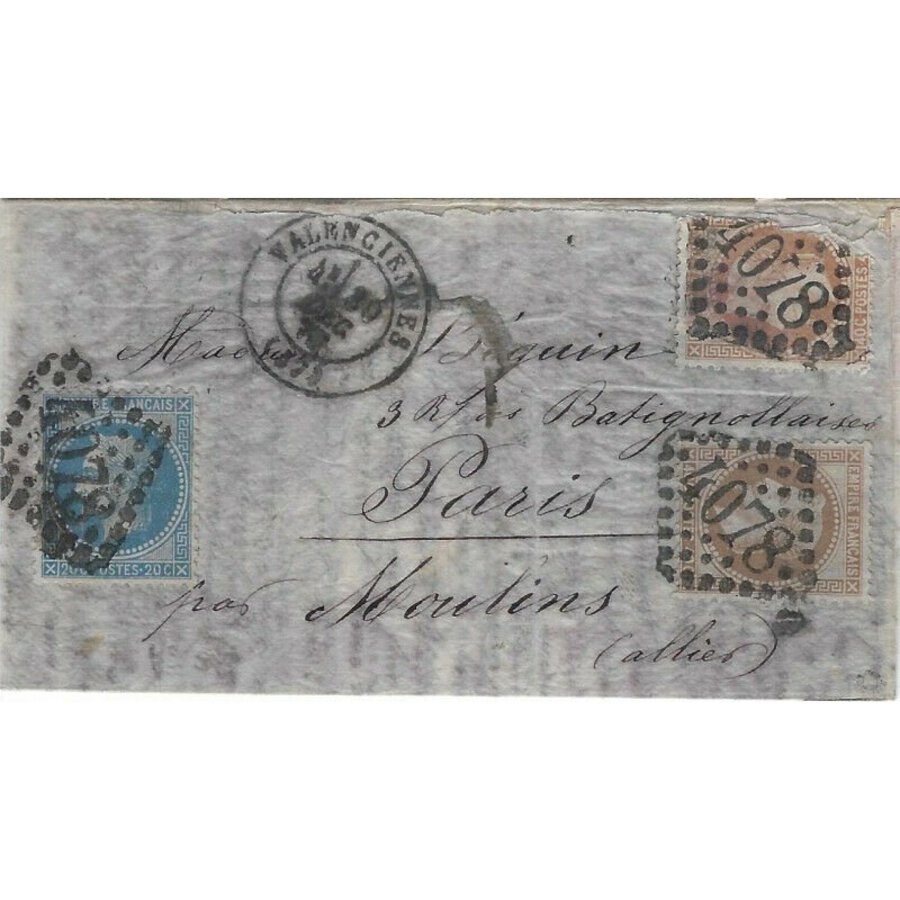 Antiquites en France has 4262 antiques for sale.
click here to see them all

Letter sent by "Boule de Moulins" mixed postage stamp from France N ° 29 and N ° 31 (2ex one of which is defective) canceled rhombus GC4078 next to date stamp Valenciennes30 December 1870 for Paris on the back stamp "Lille in Paris" without arrival stamp .
With text dated 30/12.
Beautiful presentation, TB, Rare!
CertificateRoumet.
A Moulins ball is a method of transporting mail to the city of Paris used during the siege of the city during the War of 1870. As the mail using this means was previously centralized in Moulins (Allier), these balls were said to be " of Moulins ".
The Moulins balls, made of metal and filled with mail, were immersed in the Seine well upstream of Paris. Rolling on the bottom of the river, they had to cross the lines of the besiegers and be recovered near the capital. The process proved to be a total failure, no Moulins ball reaching Paris before the end of the siege, even if more than half of them were recovered from Seine-et-Marne to the mouth of the Seine.
In order to continue to correspond with the province in a capital completely surrounded by the Prussians, various means had been used, balloon mounted or homing pigeons, but especially in the Paris-province direction. In the other direction, this was more delicate and the idea of ??making watertight balls containing mail travel on the Seine current was implemented, according to the principle of the bottle in the sea. To foil the surveillance of the besiegers and the devices they installed to block the Seine, the balls must not float on the surface or between two waters; they descend the current while rolling on the bottom1. Three engineers (Pierre-Charles Delort, Émile Robert and J. Vonoven) developed the system based on the production of sealed zinc cylinders once closed by welding. The cylinder, with a length of 20cm for a diameter of 12cm, is provided with fins intended to make it rotate on itself in the current of the river. Weighing a little over 2kg, the whole has the shape of a sphere and can contain 500 to 600 letters which should not exceed 4grams each2. The device is perhaps inspired by a comparable device, used for contraband tobacco on the Franco-Belgian border, in the waters of the Yser. Two successive experiments with a ball on the Bièvre are conclusive1.
The balls made in Moulins are launched in the Seine upstream of Paris, from Bray-sur-Seine to Samois-sur-Seine, and nets descending to the bottom of the Seine bed, stretched behind the enemy lines, at the English Port in Alfortville, must recover them. Delort stays at Moulins to condition the balls, fill in the slips detailing their content; Robert ensures the transport of "agents" - to avoid leaks, this is the term used to designate the balls - from Moulins to the banks of the Seine where he immerses them; Vonoven is responsible for raising the nets3.

Failure report
The system was not effective since none of the 55 balls sent from January 4 to 29, 1871, the date on which service was interrupted, was not recovered during the siege3. They were probably silted up, stopped by obstacles or passed through nets destroyed by the ice cubes carried by the Seine on January 22. On February 10, 14,600 pending letters were discovered in Moulins. They were transported to Paris hidden in bags of rice4.Certain balls, however, could be found after the end of the siege: the first was recovered in March 1871 at Les Andelys. However, it seems that a ball was recovered before this date, because a letter is known with its stamp of arrival in Paris on February 12, 1871 (sale on offer of a Parisian stamp dealer, June 2014). Ultimately, about 25 to 30 balls were found, most of them before 1910. But one was found in 1942, another in 1952. More recently, a ball was reassembled by the operator of a dredging machine in Saint-Wandrille (Seine-Maritime), August 8, 1968. A ball was again recovered at Vatteville-la-Rue (Seine-Maritime) in 1982, then another in 19885.6. Each time, the postal administration seeks to deliver the letters to the descendants of the original recipients according to the principle that “the mission of mail delivery has no time limit. The mail entrusted to La Poste must arrive at all costs ”7. Out of 55 balls made up, around twenty remain stuck at the bottom of the Seine and could resurface in the coming years8. But the location of the latest finds (downstream from Rouen) suggests that the remaining balls to be discovered could have moved away from Paris considerably, or even reached the English Channel. After the end of the War of 1870, a repechage was declared at Saint-MaloNote 1. For this, the sea currents would have had to allow the ball to bypass the entire Cotentin peninsula, which may seem surprising; it is also possible that a fisherman trawled it near the mouth of the Seine and then brought it back to its home port4.Bargaining and Struggles for Influence
After submitting their project to Germain Rampont, director of posts in Paris, Delort and Robert reach Tours and then Bordeaux to meet François-Frédéric Steenackers, director of telegraphs who followed the French government in exile. Steenackers discusses with them prices and practical arrangements: the mail will be centralized in Clermont-Ferrand9. But, in Clermont-Ferrand arrives, written by Steenackers, the order to suspend the operation; new financial negotiations, less favorable to the designers of the project, take place, and the place of collection of letters is transferred to Moulins. The reasons for this turnaround are not well known, but the notorious enmity between Rampont and Steenackers is perhaps not unrelated to it3.
The delays caused by these delays have certainly weighed in the failure of the project: the days passing with the arrival of winter, the current of the Seine slows down with its partial jam and the first balls are only submerged January 4, 1871 when the operation could have started at least a fortnight earlier. After the war, Delort and Robert, who were not paid for their work, brought actions against the State to obtain financial compensation, but without success3.
Philatelic aspect
The envelopes which were intended to enter Paris through the balls were sent from all over France to Moulins and had to be franked at 1 franc instead of the 20 cents of the normal rate. The additional 80 cents were intended for the remuneration of the three designers and operators of the ball system (paid half for mail registration and half for actual receipt), however no guarantee was promised to users. The number of letters concerned is estimated between 30,000 and 35,000. In order not to inform the enemy, they were distinguished by no special stamp, only the surprising mention Paris, by Moulins (Allier) being necessary.
Of course, the letters having passed through the Moulins balls have a very significant market value and, on the occasion of the discovery of 1968, the Post decided to affix on the back of the recovered letters an official label authenticating them.
Price: SOLD

Antiquites en France has 4262 antiques for sale.
click here to see them all