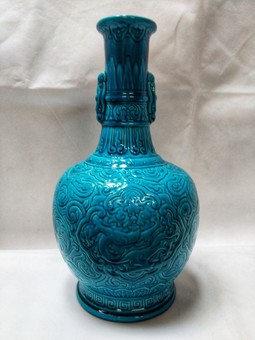 Antica Roma Anticuario has 38 antiques for sale.
click here to see them all

We start from the foot with a shade from blue to dark blue, a relief in Greek surrounding the base.The body has shades (always raised to the main touch) with marine motifs mixed with floral motifs.The eupula with a very pronounced curve, in order to heal the beauty of the body and not be part of the beautiful neck, enriched by shades ranging from blue to dark blue upper open outward.In conclusion: a vase of rare beauty, a beautiful work here, women an original touch or it is placed.Delivery in a wooden caseFor more photos and information: do not hesitate to contact me.Delivery in Portugal, France, Italy, Germany, Belgium, the Netherlands, Switzerland, Austria included in the price.The vase has no repair or scratch, it is in perfect condition.Take a look at our social media profiles to read customer reviews and view our shipping packagingNicolò Di Giuseppe
Whats App +34 665372671
Antica Roma Anticuario
anticaromatoledo@gmail.com
Instagram: anticaromatoledoPaul Milet, a French ceramist, born January 25, 1870 in Sèvres and died after October 4, 1930. Paul Milet is the son of ceramist Félix Optat Milet (1838-1911). After training at the Manufacture de Sèvres laboratory, he became a chemist and worked in the factory founded by his father in 1866 at 8 rue Troyon in Sèvres, near the Manufacture. From 1890, he gradually succeeded his father. Like him, he will continue to benefit from the collaboration of the artists of the Manufacture Nationale de Ceramique de Sèvres. In 1899 he married Marie-Louise Gibert (known as Céline), whose brother Paul held a post in Paris as director of Haviland, famous porcelain manufacturer in Limoges. Paul Milet worked with his father Optat Milet until his death in 1911, then with his son Henry, ceramist engineer, who was appointed plant manager in 1931, which did not stop father and son from working in close collaboration. Paul Milet began signing his "MP Sèvres" pieces in a dotted circle, either when he joined the company or probably from 1911 on the death of his father, Felix Optat Miletus. Over the years, the Manufacture de Porcelaine de Sèvres worried about the possible confusion between the productions of each other. Threatened with a lawsuit, Paul Milet changed his mark by reversing the initials. On October 4, 1930, he filed the mark "PM Sèvres" in the same dotted circle. On July 16, 1945, a mark extended to "St Paul Miletus and his son" was registered. Some pieces, older probably, are simply signed "Sèvres". Others are accompanied by the name of the artist who participated.

Our antique shop is located in one of the most beautiful and cultural cities in Spain: Toledo, city of three cultures. We only deal with original and curious antiques of different historical periods: we have articles ranging from the 15th century to the most recent Art Deco. We always try to offer our customers reliability, perfect communication, speed and above all quality in packaging and shipping all over the world. Our prices include shipping to the following countries: Spain, Portugal, France, Italy, Germany, Belgium, the Netherlands, Switzerland, Austria (Islands excluded). Take a look at our social media profiles to read customer reviews and view our shipping packaging. Nicolò Di Giuseppe +34 665372671 +34 925040429 Antica Roma Anticuario anticaromatoledo@gmail.com Instagram: anticaromatoledo

Antica Roma Anticuario has 38 antiques for sale.
click here to see them all