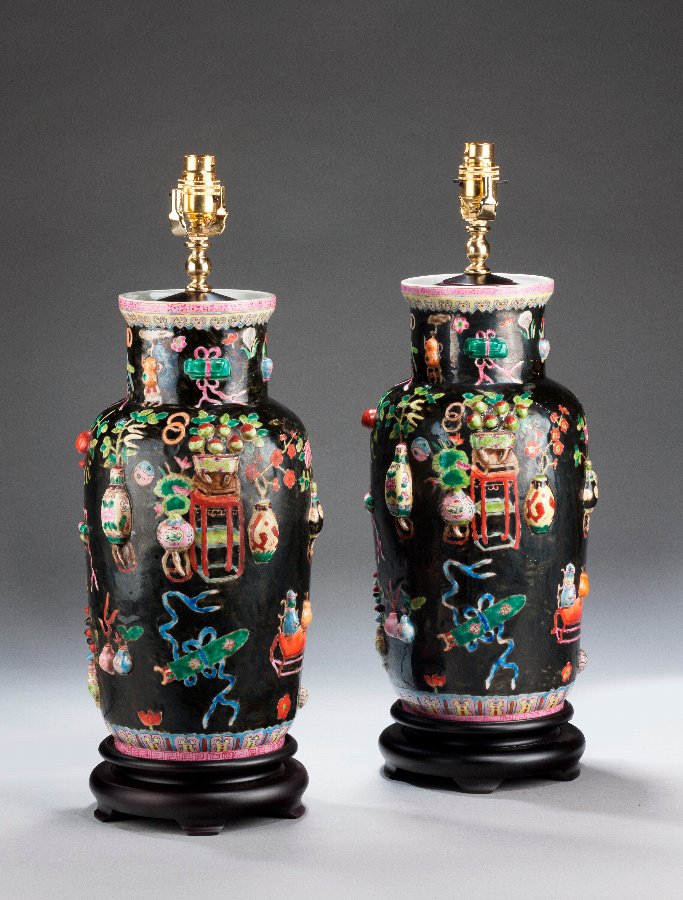 Pair of Canton porcelain lamps with applied 'one hundred antiques'.

Canton porcelains are Chinese ceramic wares made for export in the 18th to the 20th centuries. The wares were made, glazed and fired at Jingdezhen but decorated with enamels at Canton (Guangzhou) in southern China prior to export by sea through that port.The 'Hundred Antiques' design is an important development in Chinese art marking the transition of the Ming to Qing periods in the mid-seventeenth century. The collapse of the Ming (1368-1644), the last native Chinese dynasty, and the establishment of the Manchu Qing dynasty (1644-1911) was a politically and intellectually turbulent chapter in Chinese history. The 'hundred antiques' emerge from this period, symbolising the continuity of Chinese culture. The design consists of a collection of culturally significant objects: books, the implements of writing together with related objects such as brush and water containers, archaic bronze vessels, porcelain, musical instruments and pastimes such as the game of go. Rarely totalling one hundred items, this figure probably simply represents a large number, as in the 'hundred names', a term used to describe the Chinese nation.RRCirca = 1990Item Reference 5153Height = 16.00 inches
Condition = Excellent Windsor House Category = Lamps