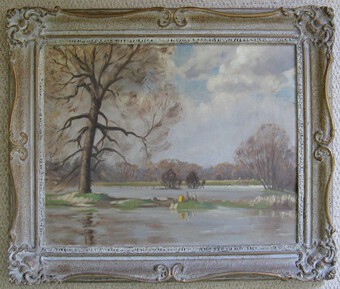 a part of the furniture

A Part of the Furniture has 42 antiques for sale.
click here to see them all

Smyth was the founder of the Finchley Art Society and a prolific artist. From age seven onwards, he painted over 4000 pictures during his lifetime. His subjects include some paintings done during the First World War in Gibraltar, Egypt and at Netley Hospital, Southampton, while recuperating from injuries received during the Battle of Passchendale. He also painted on Canvey Island, Hampstead & Highgate, Oxford and many other locations. At the beginning of World War II, Smyth was the headmaster of Wormholt Park Boys School in London and was evacuated to Oxford with 500 children. Living in lodgings in Iffley Road, he painted extensively in the city and surroundings and held an exhibition of his work to raise money for the war effort in 1941. He retired from teaching in 1943.The present work, signed to the bottom left, is thought to be of the water meadows around Oxford and would be from this period.Frame 54.5cm x 64.5cm (21.25" x 25.5") & Depth c6.5cm (2.5")
Picture 39.5cm x 49.5cm (15.5" x 19.5")This is an original artwork, probably dating from 1940-43 or a little later but both canvas & frame are in good, clean & sound condition.J-022082/621

A Part of the Furniture

Located in Northamptonshire, ‘A Part of the Furniture’ is the creation of Robert Lee, a Dealer from Brackley, with over 10 years experience trading in an ever-changing hand-picked selection of Antique, Period, Retro & Reproduction Furniture at affordable prices, together with Fine Art and many other exceptional Decorative Pieces, for example in Porcelain, Earthenware, Glass, Metalwork & Treen. Robert also collaborates with Jonathan Blakeney, who has been restoring antique furniture for over 30 years and is based near Silverstone. We welcome your enquiries and will always do our best to respond promptly, whether they concern items listed on antiques.co.uk or regarding our particular knowledge & skills, especially if you have pieces of furniture that require professional & sympathetic restoration or if you are seeking out specific items of furniture for your home or business.

Other antiques available from a part of the furniture

a part of the furniture

A Part of the Furniture has 42 antiques for sale.
click here to see them all