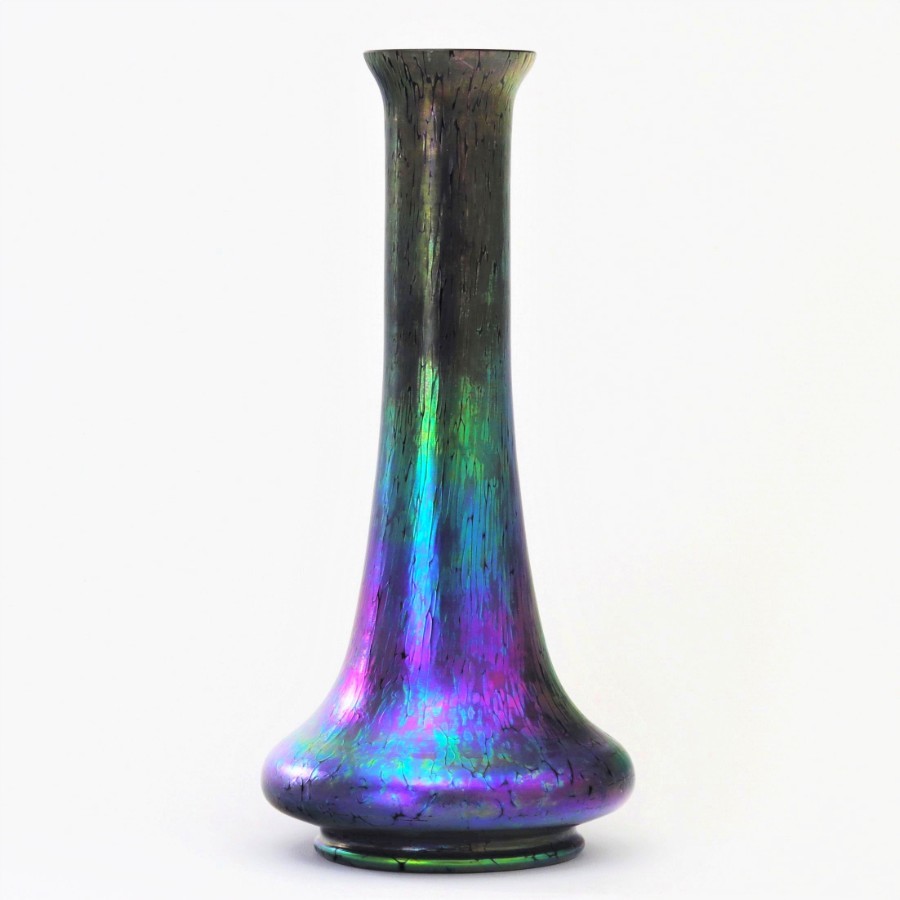 Antique Ethos has 168 antiques for sale.
click here to see them all

Unusually tall, high iridescent Loetz glass vase in the less commonly seen ruby or rubin ground with papillon decor c1900. Ruby ground with iridescent papillon finish giving a brilliant rainbow of colours from iridescent violet and blues at its base through to gold and amber at its rim. Compressed footed body with elongated tapering neck finishing with a gently flared-out rim. The vase is 31 cm in height.
This vase is in excellent original condition commensurate with age and with no chips, cracks or scratches. Please see images as these form an important part of the description.

Johann Loetz was a glassmaker about whom little is known. It was his widow Susanne who was the start of Loetz after her second husband (Frank Gerstner) bought a glassworks in Southern Bohemian – transferring ownership to her shortly before his death in 1855. Susanne successfully led and expanded the company (known as Johann Loetz Witwe) – passing it to her son-in-law (Maximilian von Spaun) in 1879. He modernised the factory and introduced new patented techniques and processes. Maximilian first saw Tiffany’s Favrile glass exhibited in Bohemia and Vienna in 1897 - convincing him that the Art Nouveau style would be the company's future. The next decade was to be the most artistically significant and profitable period for Loetz. However, despite further artistic collaborations and new designs, sales started to decline in the 1900’s and by 1911 Loetz needed additional funds from the von Spaun family. The departure of Loetz's artistic director in 1913 followed by a major fire and the outbreak of WWI virtually sealed the company's fate. Loetz had a slight but brief revival after the war however the Great Depression in the late 1920s and another major fire in 1930 had a devastating impact and Loetz declared bankruptcy in 1939 following the German invasion of Czechoslovakia. The glassworks manufactured utilitarian glassware for the Third Reich throughout WWII, but ultimately closed down completely in 1947.

Antique Ethos has 168 antiques for sale.
click here to see them all