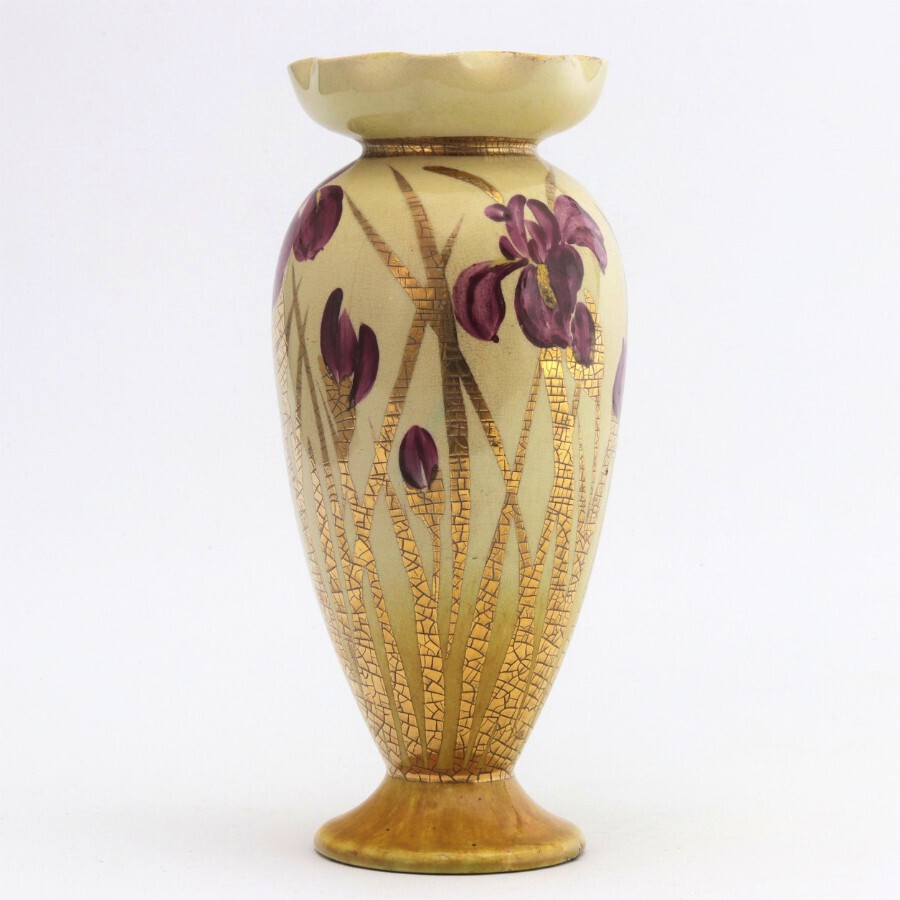 Linthorpe Pottery Aesthetic Movement vase decorated with irises by Clara Pringle c1885. Footed baluster-form vase with waisted neck and cup-shaped scalloped rim. Striking and unusual design of loosely painted irises in attractive crackled gold and purple, over a graduated amber to pale golden-yellow ground. Impressed Linthorpe Pottery mark and number 2193 to the base together with monogram CP for Clara Pringle. The vase measures 23 cm in height.
This vase is in very good overall condition with no chips or cracks. Ground glaze is crazed throughout - as is very commonly seen with Linthorpe Pottery pieces. Very tiny (1mm) glaze flake to rim which has been restored. Please see images as these form an important part of the description.

In 1879 John Harrison (a local businessman) established Linthorpe Pottery in conjunction with Christopher Dresser, one of the most influential designers of the late 19th century. Dresser acted as artistic director at the Pottery until 1982 and continued to submit designs whilst the Pottery remained in production. Dresser recommended Henry Tooth, an artist from Buckinghamshire working at that time on the Isle of Wight, as pottery manager. Henry Tooth, with no prior experience of clay or pottery left Ryde for Linthorpe, spending time at the T.G. Green pottery in Church Gresley, Derbyshire to get a foundation in ceramics. Henry Tooth had brought Richard Patey with him from the Isle of Wight, who managed the pottery after he left in 1882 (to establish to Bretby Pottery in partnership with William Ault).