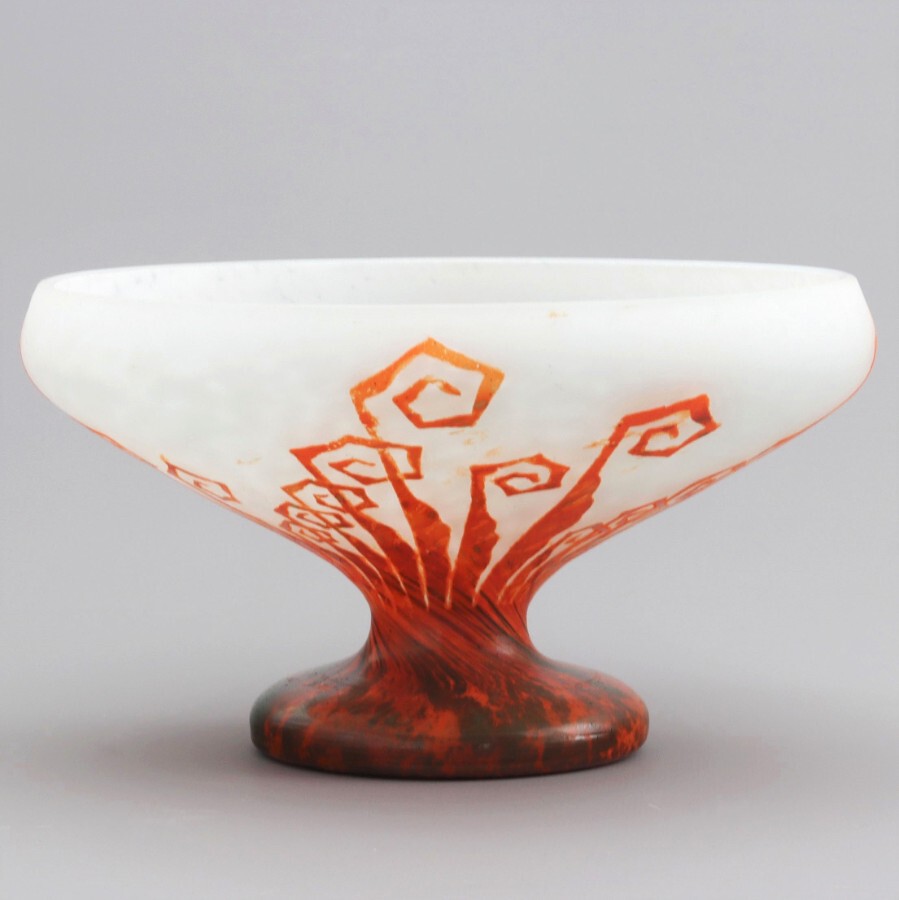 Striking “Le Verre Français” Art Deco cameo glass vase in the Fougères design by Charles Schneider c1930. Footed pedestal vase steeply tapering to a broad rim. Stylised design inspired by young fern leaves unfurling as they open. Acid etched cameo glass design in orange and bronze overlay over a white and clear pâte-de-verre frosted ground. Overlay colour transitions from bronze and orange at the foot, to orange below the rim. Etched signature “Le Verre Français” to the foot. Ground pontil mark to base. The vase is 12.5 cm in height and 22 cm in diameter.
This vase is in excellent original condition with no chips, cracks or scratches. Extremely minor signs of age. Please see images as these form an important part of the description.

Charles Schneider (1881-1952) was born in Chateau-Thierry, near Paris but at an early age, the family moved to Nancy – a major centre of the Art Nouveau movement in France. Both Charles and his brother Ernest (1877-1937) worked for Daum – Ernest in administration and Charles as a glass engraver, whilst also studying at the Ecole des Beaux-Arts. In 1913, together with Henri Wolf, they founded the “Schneider Freres & Wolf” glass factory in Épinay-sur-Seine – starting with a group of workers they had persuaded to leave Daum. After closure during WWI the factory re-opened in 1917 as the "Societe Anonyme des Verreries Schneider". By 1920, the factory was working at full capacity making mainly art glass. In 1921 the company introduced new trademarks – using Schneider, Le Verre Français and Charder (a contraction of Charles Schneider). Le Verre Français and Charder, made solely using the technique of acid etching, was primarily sold through the exclusive Parisian department stores such as Galeries Lafayette, Le Printemps and Le Bon Marche. Pieces signed Schneider tended to be sold by specialist galleries such as Delvaux, Rouard, La Vase Etrusque and Le Grand Depot. The same design often being produced under the three trademarks. Following the 1925 Paris International Exhibition, new designs were created in the Art Deco style. Schneider’s geometric designs inspired from nature proved popular both in France and abroad – and the factory expanded to employ around 500 workers. However, after the Wall Street crash demand dwindled to a few pieces a day – produced mainly for the home market. On top of this they started a costly legal battle with David Guéron (the owner of Degué glassworks) – accusing him of plagiarising their designs. They won the case, but by then the Depression had already taken its toll and Schneider glass filed for bankruptcy in 1939. In 1950, Charles Schneider together with his son (Charles Schneider junior) founded "Cristalleries Schneider" producing art glass in the ‘mid-century modern’ style. A factory fire together with financial problems led to its closure in 1981.