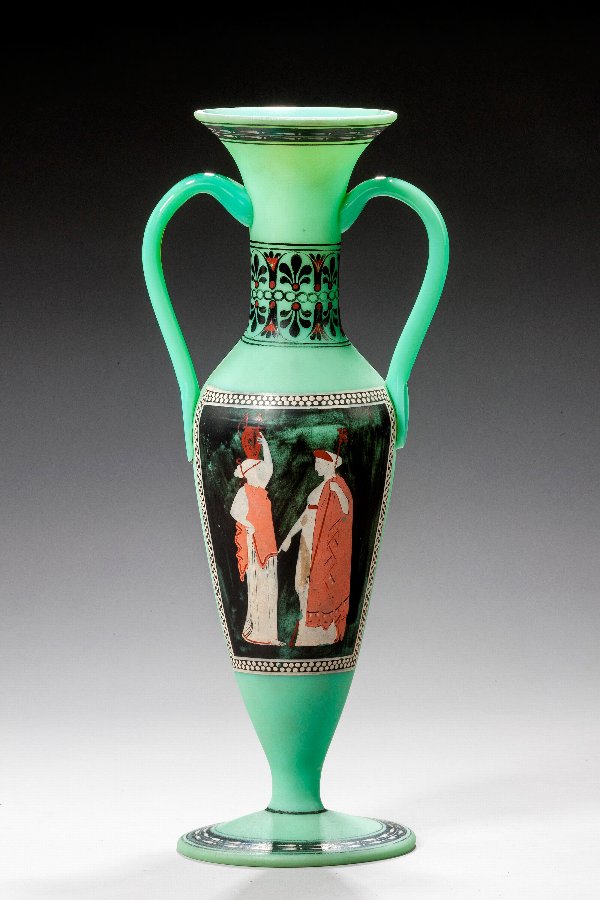 Opaline glass is a decorative style of glass made in France from 1800 to the 1890s, though it reached its peak of popularity during the reign of Napoleon III in the 1850s and 1860s. The glass is opaque or slightly translucent, and can appear either white or brightly colored in shades of green, blue, pink, black, lavender and yellow. The glass has a high lead content which defined it as "demi-crystal" or semi-crystal. The primary influences on this style of glass were 16th century Venetian milk glass, and English white glass produced in 18th century Bristol.
Many different pieces were produced in opaline glass, including vases, bowls, cups, coupes, decanters, perfume bottles, boxes, clocks and other implements. The popularity of Opaline glass began during the reign of Napoleon. Cities involved in the production included Le Creusot, Baccarat, and Saint-Louis, Réunion, as well as various locations in England.
All opaline glass is hand-blown and has a rough or polished pontil on the bottom. There are no seams and no machine engraving. Many pieces of opaline glass are decorated with gilding. Some with handpainted flowers or birds. Several have bronze ormolu mounts, rims, hinges or holders. Real opaline glass was produced only in France. In the 20th century Italy produced a similar glass and called it opaline veritableCirca: 1890
Item Reference = 5460