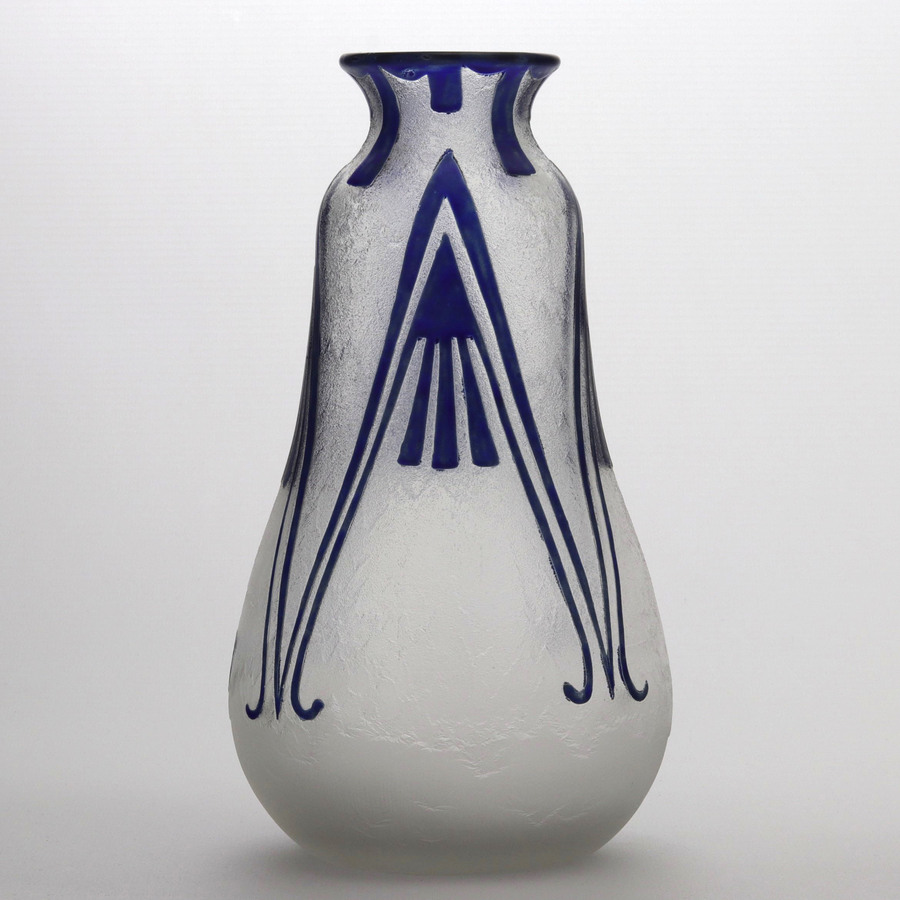 Attractive French Art Deco cameo glass vase by Legras c1925. Gourd shaped body with waisted neck and everted rim. Geometric design around the body and rim. Acid etched cameo glass with overlay in indigo over a textured ground. Cameo signature “Legras” to lower body. Ground pontil mark to base. The vase measures 22.5 cm in height.
This vase is in excellent original condition with no chips, cracks or scratches. Extremely minor signs of age. Please see images as these form an important part of the description.

The firm was established by François-Théodore Legras (1839-1916) when he took over a glassworks near Paris – previously the Verrerie et Cristallerie de Saint-Denis. Originally from the Vosges region, François started working life as a woodsman but managed to secure a clerical apprenticeship at the nearby glassworks in Clairey. After completing his apprenticeship aged 24, he moved to Paris and took a job at the Plaine St Denis factory. By the age of 27, Legras had become director of glassmaking. In 1883, in partnership with the renown patron, Sir Richard Wallace, he acquired and undertook a massive expansion of the factory in Saint-Denis – also purchasing an older factory in Pantin, north-east of Paris. With Wallace’s financial support and inspiration from Gallé, Legras encouraged an experimental approach and developed several art-glass production techniques. He brought his 14-year-old nephew, Charles (1859-1922), into the business as an apprentice and encouraged him to develop his flair for glass chemistry – winning the company a gold medal at the Paris World Fair 1878, and the grand prix in 1889. By the end of the nineteenth century, Legras et Cie was amongst the largest and most influential glass producers in France. In 1909 François-Théodore handed over management of the company to Charles. A second nephew, Théodore, also joined the company in the early 20th century, training in chemistry before taking over management of production – and subsequently management of the company in 1922 after Charles’ death. Production continued until 1928 when the glassworks were sold.