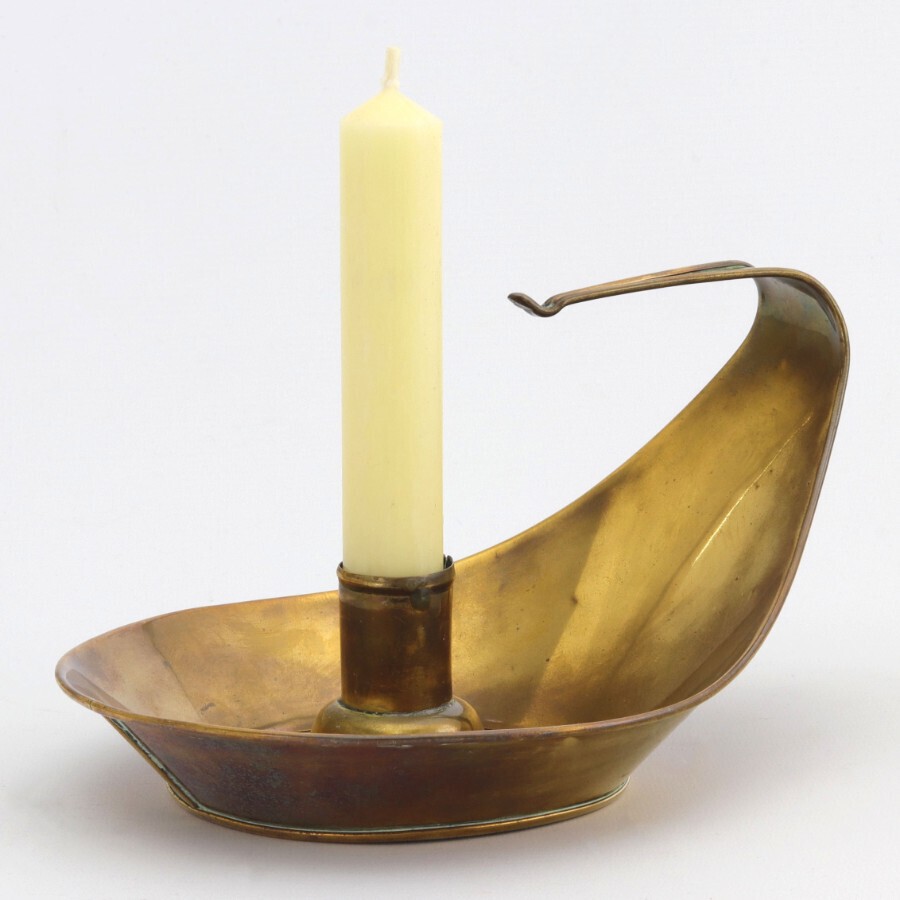 Antique Ethos has 177 antiques for sale.
click here to see them all

A Christopher Dresser designed brass chamberstick for Richard Perry Son & Co c1885. Brass chamberstick with circular wax pan with pulled rim forming a looped handle. Central cylindrical candle-holder raised within the wax pan. Factory mark to base Richard Perry Son & Co Wolverhampton. The chamberstick measures 12 cm to the top of the handle and 22 cm maximum length. Diameter of wax pan is 17 cm. (Candle not included.)
This chamberstick is in overall very good use condition commensurate with age. No significant dents or marks to the brass. Some tarnish spots to the brass which has been left unpolished to retain its patina. Please see images as these form an important part of the description.

Richard Perry (1780-1863) and his sons Edward (1800-1869) and George (1805-1877) were all japanners in the Old Hall Tin & Japan Works in Wolverhampton before setting up on their own c1828. Whilst Richard and his son, George went into business, establishing Richard Perry & Son – Edward chose to go into partnership with William Shoolbred (this partnership being dissolved in 1839). It appears that Edward’s firm was the more successful – however, he died in 1869 without children and his firm was merged with that of Richard Perry & Son, eventually forming Richard Perry, Son & Co. The firm has more recently become well known as one of the handful of companies for which there is documentation from the period illustrating services provided by industrial designer Dr Christopher Dresser. The firm submitted numerous innovative designs for chambersticks (amongst other household items) to the PODR during the mid-1880s when Dresser was actively designing for the company. Richard Perry, Son & Co were one of the few firms of the time that actually marked some if the items they produced – a rare few also carrying the Dresser mark.

Antique Ethos has 177 antiques for sale.
click here to see them all