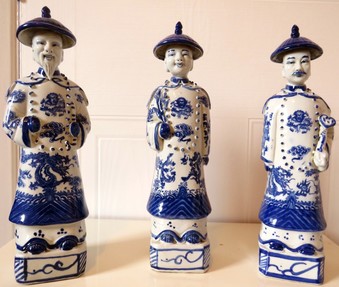 private seller has 3 antiques for sale.
click here to see them all

Porcelain figurines depicting the Chinese rulers known as the Three Emperors, part of the Qing Dynasty of China, wearing the royal robes adorned with dragons. Grandfather, the Kangxi Emperor, father, the Yongzheng Emperor and grandson, the Qianlong Emperor. These three are considered among the greatest emperors of Imperial China, building a century of prosperity with their rule from 1662 - 1795. The figure with the white hair and beard is the Kangxi Emperor - the longest reigning Chinese ruler; his son, the Yongzheng Emperor is the figure with the mustache, and the grandson, the Qianlong Emperor and second-longest reigning Chinese ruler, is the clean shaven figure. These figurines are solid, well-made unglazed porcelain and excellent quality, from the early 20th Century.

private seller has 3 antiques for sale.
click here to see them all