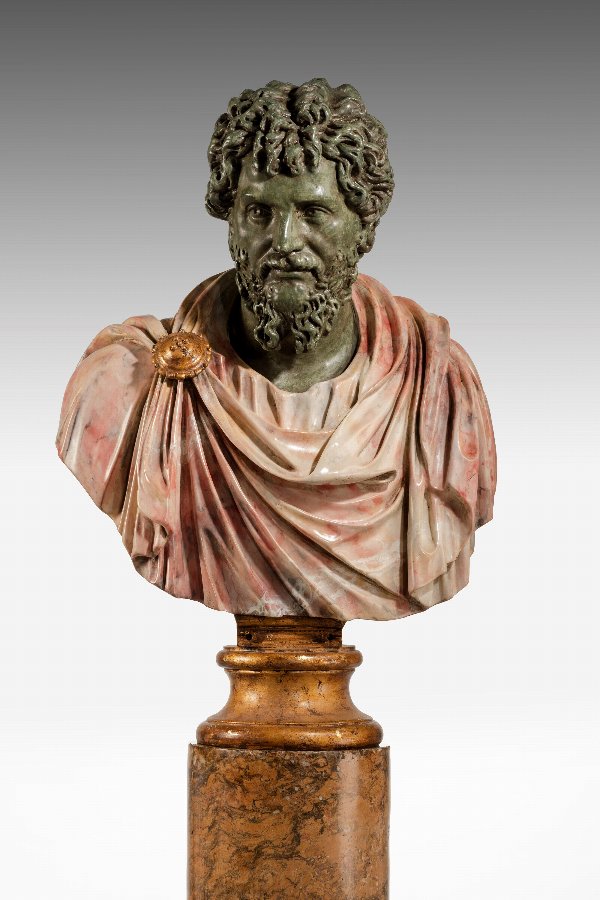 Sold without pedestal.Septimius Severus 11 April 145 – 4 February 211, also known as Severus, was Roman emperor from 193 to 211. Severus was born in Leptis Magna in the Roman province of Africa, and became the first Roman Emperor born in Africa. As a young man he advanced through the cursus honorum—the customary succession of offices—under the reigns of Marcus Aurelius and Commodus. Severus seized power after the death of Emperor Pertinax in 193 during the Year of the Five Emperors. After deposing and killing the incumbent emperor Didius Julianus, Severus fought his rival claimants, the generals Pescennius Niger and Clodius Albinus. Niger was defeated in 194 at the Battle of Issus in Cilicia. Later that year Severus waged a short punitive campaign beyond the eastern frontier, annexing the Kingdom of Osroene as a new province. Severus defeated Albinus three years later at the Battle of Lugdunum in Gaul.
After consolidating his rule over the western provinces, Severus waged another brief, more successful war in the east against the Parthian Empire, sacking their capital Ctesiphon in 197 and expanding the eastern frontier to the Tigris. Furthermore, he enlarged and fortified the Limes Arabicus in Arabia Petraea. In 202, he campaigned in Africa and Mauretania against the Garamantes; capturing their capital Garama and expanding the Limes Tripolitanus along the southern frontier of the empire.
Late in his reign he travelled to Britain, strengthening Hadrian's Wall and reoccupying the Antonine Wall. In 208 he invaded Caledonia (modern Scotland), but his ambitions were cut short when he fell fatally ill in late 210. Severus died in early 211 at Eboracum (today York, England), succeeded by his sons Caracalla and Geta. With the succession of his sons, Severus founded the Severan dynasty, the last dynasty of the empire before the Crisis of the Third Century.Item Reference = 7140