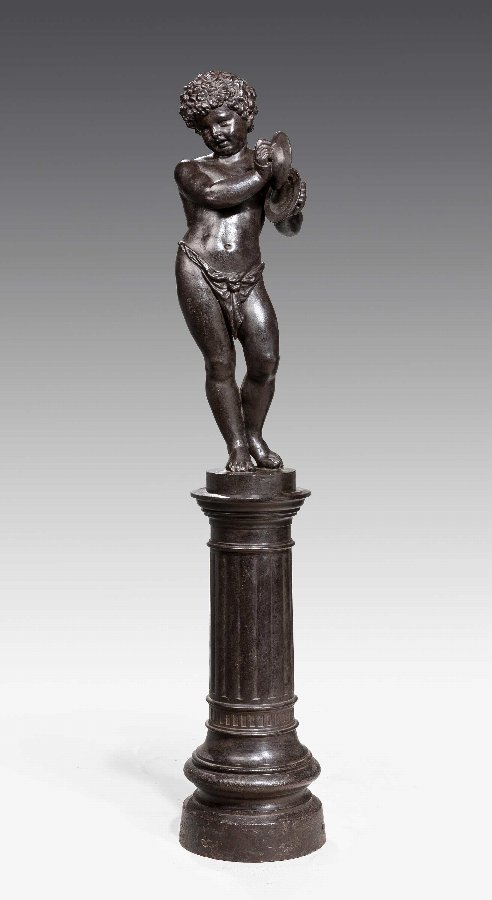 A fine bronze patinated cast iron figure on a fixed pedastal of a Putti playing cymbals by Val D'osne. Val osne is a deviation from the common Osne-le-Val in Haute-Marne. Workshops, created in 1836 by Jean-Pierre Victor Andre to make street furniture and decorative cast iron, quickly becoming the most important production of art cast in France under the name of "art foundry of Val d'Osne
Jean-Pierre André Victor (December 26, 1790) began his career as a contractor in the city of Paris. He was also manager of foundries Thonnance-lès-Joinville Cousances-aux-Forges, which gave him the experience of production and market knowledge of ornamental iron.
It was soon noticed by the quality of its productions it does do in Haute-Marne, then the research productivity that allows him to lower the price of its balconies and ornamental fonts. The plant, established in 1836 (leave - the date of production is not certain) has been designed from the outset for ornamental cast iron.
1827, André and Calla are noted for their production: thus it is written in a report by the Society for the Encouragement of National Industry:
"André, master foundries, rue Neuve-Ménilmontant in Paris - André, eagerly accepted by the jury of the Seine, who knows his valuable work, however, has sent the exposure that a balustrade in cross pig iron. . The room, the price was 15 f, indicating recent advances in factories located in Champagne, we regret that it has not been accompanied by harder runtime objects and other common parts, that Cast reproduced with a marked economy (1), and whose business manufacturing high in this province is largely due to the example André gave one of the first. (1) See page 75. . The sepulchral ornaments, door knockers, bas-reliefs, etc., in pig iron (...) were derived from plants André, their prices low and their performance made them strong remarquables1. "
In 1839, his reputation is sitting: Establishing André has long been known in the trade: its cast irons are valued for their performance and quality. André was the first introduced in the department of Haute-Marne, sand casting, replacing the molding clay, much longer and more expensive. This improvement soon spread: it resulted in a large decrease in the price of cast irons. Establishing Osne-le-Val is the largest of its kind in the Haute-Marne.
The jury awarded Mr. André argen a medal

At the London Exhibition, the jury awarded four medals (medals council) industry with cast irons. In this number there were two in France, one in Germany and one in England. "The fact is that our fonts surpassed all others in purity of form, elegance and clarity of drawings and surface finish at the end of the mold. "