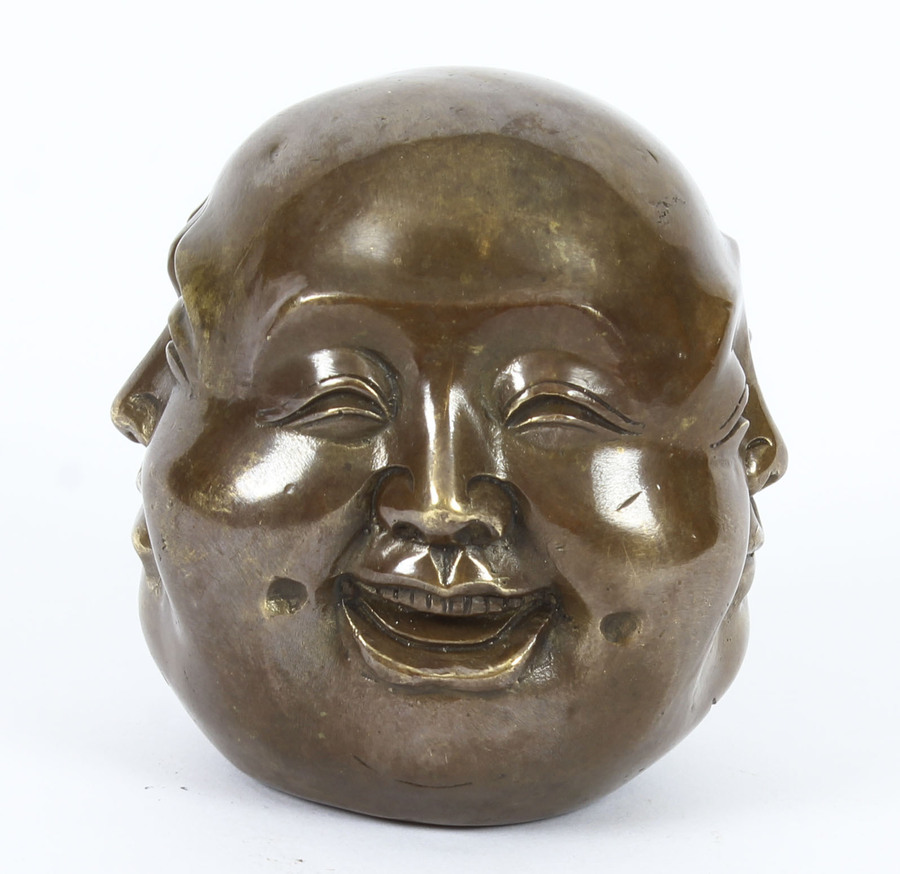 This is a stunning and very unusual bronze bust of the famous four-faced Buddha.

The four -faced Buddha is a god of creation and mercy. The four faces symbolise the four books of the Vedas, the Hindu scriptures and the source of all knowledge in creation of the universe. This high quality bronze was made by the hotcastlost waxprocess.The attention to detail throughout the piece is truly striking.Condition:In excellent condition, please see photos for confirmation of condition.Dimensions in cm:Height 8 x Width 8 x Depth 8 & Weight 0.5 kgDimensions in inches:Height 3 inches x Width 3 inches x Depth 3 inches & Weight 1.1 lbs
Our reference: 02190d
The four faced Buddha at the Erawan Shrine, Bangkok is actually Lord Brahma who is one of the Trinity of Hindu Gods.The other two are Lord Vishnu, the sustainer and Lord Siva the destroyer. Brahma is said to be born from a lotus leaf sprouting from the navel of Vishnu. The Thais call Brahma, Than Tao MahaProm or Phra Phrom.When Indian scholars spread Buddhism to Thailand, they brought with them Hindu culture and folklore, which has been inextricably linked with Thai culture and beliefs.Brahma has four faces and eight hands; a feature that could have given rise to the name four faced Buddha. He is the god of creation, mercy and benevolence. He sits atop a lotus leaf; the lotus flower is commonly used for prayers at Thai shrines and altars.The shrine of the four faced Buddha was named the Erawan Shrine after Erawan, Indra's three-headed elephant. The original version actually has 33 heads! However Erawan is symbolically represented with three.The four faces symbolize the four books of the Vedas, the Hindu scriptures and the source of all knowledge in the creation of the universe.The eight hands, symbolize the omnipresence and power of Lord Brahma.The upper right hand carries a rosary, symbolizing the cycle of life from creation to death. The upper left hand carries the Vedas, symbolizing knowledge and intellect.The lower left hand carries a pot of water representing cosmic energy of creation. The lower right hand bestows grace and protection.Sometimes called by the French name of 'cire perdue' or the Latin, 'cera perduta' is the process by which a bronze or brass is cast from an artist's sculpture.In industrial uses, the modern process is called investment casting. An ancient practice, the process today varies from foundry to foundry, but the steps which are usually used in casting small bronze sculptures in a modern bronze foundry are generally quite standardised.