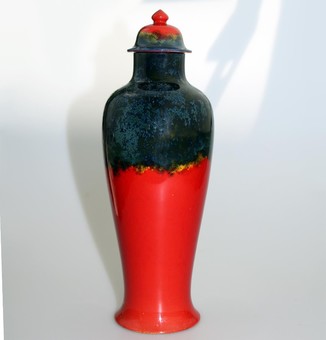 iCollectUK has 786 antiques for sale.
click here to see them all

Circa: 1910+Good Antique Overall Condition - the bottom lip of the lid (that goes under the base rim) with restoration
please view images11 inches (28cm) height approxSigned Bernard Moore underneath and BM inside lidPrice includes safe UK shipping - safe International shipping at costFlambe glazes, termed "sang-de-boeuf" (oxblood) were in use by the Chinese from the 11th century, and the effect was achieved by using copper oxide as a colouring agent and firing the object in a reducing atmosphere. European potters were not able to master the technique until the early 20th century. The Royal Doulton company employed the potter Bernard Moore, who had been experimenting with flambe glazes for many years, as a consultant. In 1904 the company was able to produce its first flambe wares, and they were exhibited at the St. Louis World's Fair in that year. As well as vases and bowls, around 1908 Doulton commenced producing animal figures with a flambe glaze and production of flambe wares continued during the 20th century. Over 2,000 different animal figures were produced over the years.
In 1920 Doulton under designer and artist Charles Noke, introduced "Sung" wares, which used a flambe glaze together with painted and gilt decoration. Various sized vases and bowls were painted with fish, birds or pixies over a background streaked with blue, yellow and green. Most of these pieces are signed by the artists of the time such as Harry Nixon and Fred Moore

iCollectUK has 786 antiques for sale.
click here to see them all