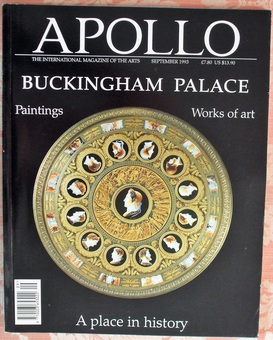 Applecross Antiques has 4114 antiques for sale.
click here to see them all

A fine clean copy of Apollo ~ Vol. CXXXVIII ~ No. 379, published in September 1993, the second of two issues devoted to Buckingham Palace. Contents include scholarly articles on "A Place in History : The Changing Significance of Buckingham Palace", by Andrew Sanders ~ "Imperial Splendour : Buckingham Palace in 1913" ~ "George IV : Furnishing in the French Taste - the place of Dominique Daguerre in the Royal Collection", by John Whitehead ~ "Clocks in the Royal Collection : From Commissioning to Collecting", by Richard Garnier ~ "Dining in State : Towards a Greater Simplicity", by Susan Jenkins ~ "Fashion in the Gallery : The Picture Gallery's Changing Hand", by Charles Noble ~ "The Picture Gallery Today", by Christopher Lloyd ~ "Zuccarelli in the Royal Collection : George III Knew What He Liked", by George Knox ~ "A Taste for History : Reynolds, West, George III and George IV", by Martin Postle ~ "Forming the Taste of a Prince : Richard Cosway and George IV's Early Collecting", by Stephen Lloyd ~ "The Guards and the Palace : Unchanging in Splendour", by Philip Mansel ~ "The Arch at Constitution Hill : A New Axis for London", by Dana Arnold, and "The Buckingham Palace Gardens Today : A Surviving Oasis", by Dana Arnold. Soft covers.

Applecross Antiques has 4114 antiques for sale.
click here to see them all