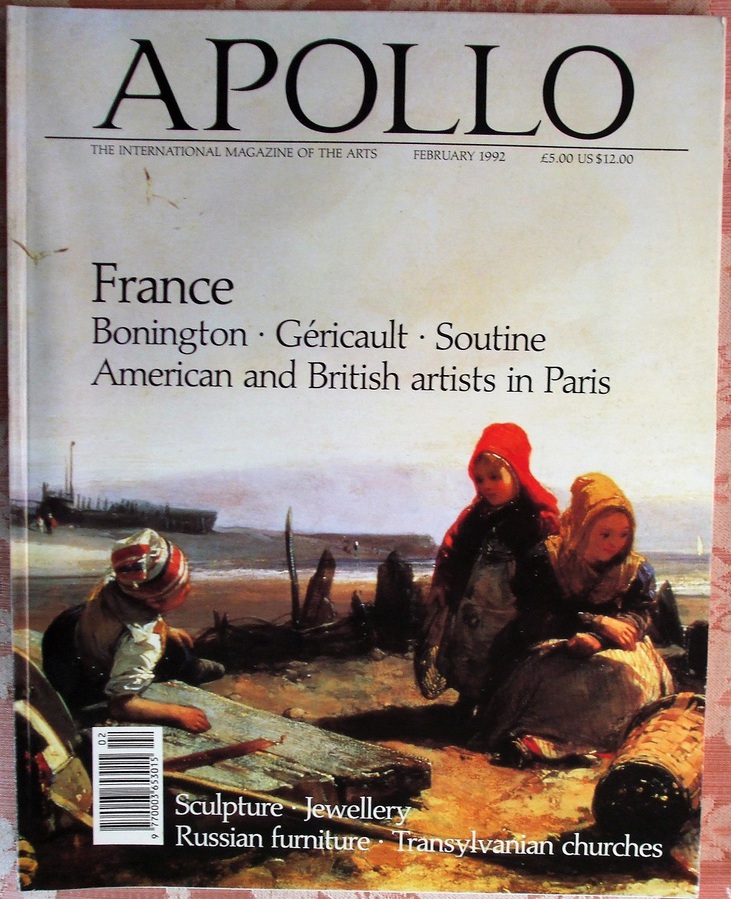 A fine clean copy of Apollo ~ Vol. CXXXV ~ No. 360, published in February 1992. Contents include scholarly articles on "The Trouble with Bonington : The Rediscovery of a Major European Master" ~ "American Painters in Paris : The Rate of Exchange 1825 - 48", by Russell M. Jones ~ "British Art Students in Paris 1814 - 1890 : Demand and Supply", by Edward Morris and Amanda McKay ~ "The Depot de Sculptures : The Unclaimed Monuments of Paris", by Ian Pears ~ "Russian Furniture for the Prussian Court : A Present of Imperial Friendship", by Burkhardt Gores ~ "The Secret of Soutine : An Interview with Madeleine Castaing", by Catherin Fisher ~ "Bonington, Boningtonism and Lord Hertford : An Addiction to the Subject", by John Ingamells ~ "Samuel William Reynolds : An Unlikely Romantic", by Felicity Owen ~ "An Unprecedented Test on White Marble : Michel Anguier's "Pluto"", by Hugues-W. Nadeau ~ "The Likeness of Christ : The Background of a Sixteenth-Century Icon", by J.H.Whitfield ~ "Transylvanian Wooden Churches : An Urgent Cause for Concern in the Maramures, Romania", by Mark Gisbourne ~ "Philippe de Wolfer's "Orchidee" : An Enameller's Tour de Force", by Klaas Akkerman, and "Exhibition Reviews ~ I.- "Gericault at the Grand Palais", by Charles McCorquodale ~ II.- "Turner's Rivers of Europe", by Eric Shanes ~ III.- "Young Van Gogh in England", by Joseph Williams ~ IV.- "John Napper / Nicholas Granger-Taylor", by Rory Snookes ~ V.- "The Triumph of Love", by Elspeth Moncrieff, and VI.- "Les Amours des Dieux", by Charles McCorquodale", plus regular monthly features. Soft covers.

BUY this scarce Reference Work NOW with your Debit / Credit Card via STRIPE our Ultra Secure Payment Gateway, via DIRECT BANK TRANSFER or via PAYPAL ~ Simply make your selection at the Checkout.
Price: £40.00