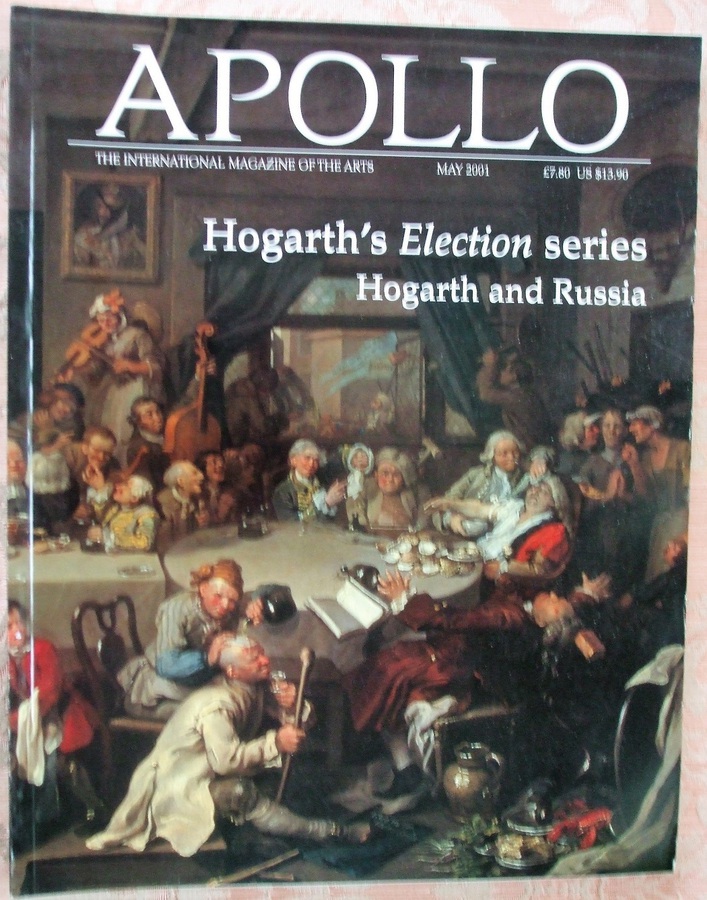 A fine clean copy of Apollo ~ Vol. CLIII ~ No. 471, published in May 2001, and largely devoted to Hogarth's Election series and Hogarth in Russia. Contents include scholarly articles on "Chairing the Member ~ Hogarth's Election Paintings and their Influence", by David Bindman ~ "The Grand Finale, Newton reigns Supreme : An Interpretation of Chairing the Member", by Elizabeth Einberg ~ "The Liberty of Voting Restored : William Hogarth's Election series as a vision of electoral (dis)order", by Emma Baudey ~ "The Frontispiece to The Humours of a Country Election : A source for Hogarth's Election series", by Eva Pol ~ "The election carnival : The spectacle of the hustings", by Tamantha Blair ~ "Hogarth and Bingham : Differing visions of the electoral process", by Stephanie Eu ~ ""Help me to eclipse the celebrated Hogarth" : The reception of Hogarth in Russia", by Rosalind P. Gray ~ "Two seventeenth-century portfolios for old master drawings at Christ Church, Oxford", by Christopher Baker ~ "Catherine Lusurier, { 1752 - 81 } : A woman painter in eighteenth-century Paris", by Helen Ashmore ~ "Text and image in William Morris's "A Book of Verse"", by Michaela Braesel ~ Exhibition Reviews ~ "Giacometti : Le dessin à l'oeuvre", by John Finlay, and ~ Book Reviews ~ "Leonardo da Vinci ~ The Complete Paintings", by Giles Waterfield, plus regular features. Soft covers.