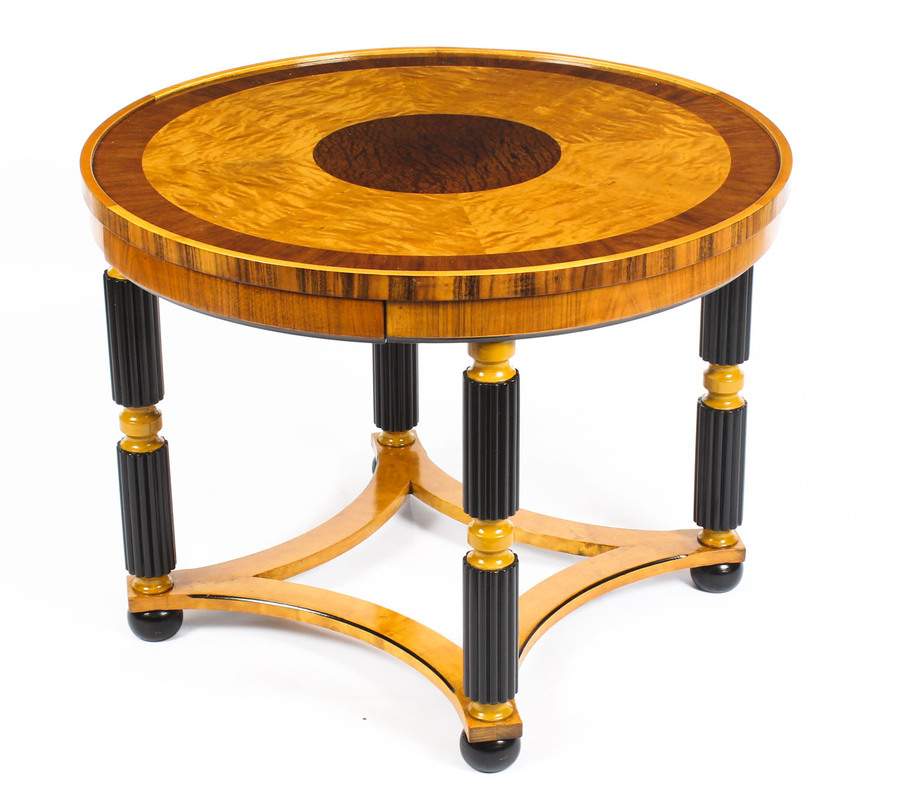 This is a stylish antique Swedish Biedermeierbirch coffeetable with ebonised detail, circa 1930 in date.

The round table features beautifully veneered specimen wood including burr burr walnut, zebra wood, pollard oak and features a pair of hidden drawers in the frieze. It is raised on ebonized flutted legs unitedby shaped stretchers on ball feet.The grain of the wood is truly breathtaking and the quality and attention to detail on display throughout this large and sturdy piece are second to none.
Condition:In excellent condition having been beautifully cleaned and waxed in our workshops, please see photos for confirmation.Dimensions in cm:Height 60 x Width 80 x Depth 80Dimensions in inches:Height 2 feet x Width 2 foot, 7 inches x Depth 2 foot, 7 inches
Our reference: A1568
Biedermeierperiod,
refers to an era in Central Europe during which arts appealed to common sensibilities in the historical period between 1815, the year of theCongress of Viennaat the end of theNapoleonic Wars, and 1848, the year of theEuropean revolutions.Although the term itself is a historical reference, it is predominantly used to denote the artistic styles that flourished in the fields of literature, music, the visual arts and interior design.Biedermeier was an influential style of furniture design from Germany during the years 1815–1848, based on utilitarian principles. The period extended into Austria and Scandinavia.Throughout the period, emphasis was kept upon clean lines and minimal ornamentation. As the period progressed, however, the style moved from the early rebellion against Romantic-era fussiness to increasingly ornate commissions by a rising middle class, eager to show their newfound wealth.The idea of clean lines and utilitarian postures would resurface in the20thcentury, continuing into the present day.TheBiedermeierstyle was a simplified interpretation of the influential French Empire Style of Napoleon I, which introduced the romance of ancient Roman Empire styles, adapting these to modern early19thcentury households.Biedermeierfurniture used locally available materials such as cherry, ash and oak woods rather than the expensive timbers such as fully imported mahogany.Biedermeierfurniture and lifestyle was a focus on exhibitions at the Vienna applied arts museum in 1896. The many visitors to this exhibition were so influenced by this fantasy style and its elegance that a new resurgence or revival period became popular amongst European cabinetmakers.This revival period lasted up until the Art Deco style was taken up.Biedermeieralso influenced the various Bauhaus styles through their truth in material philosophy.