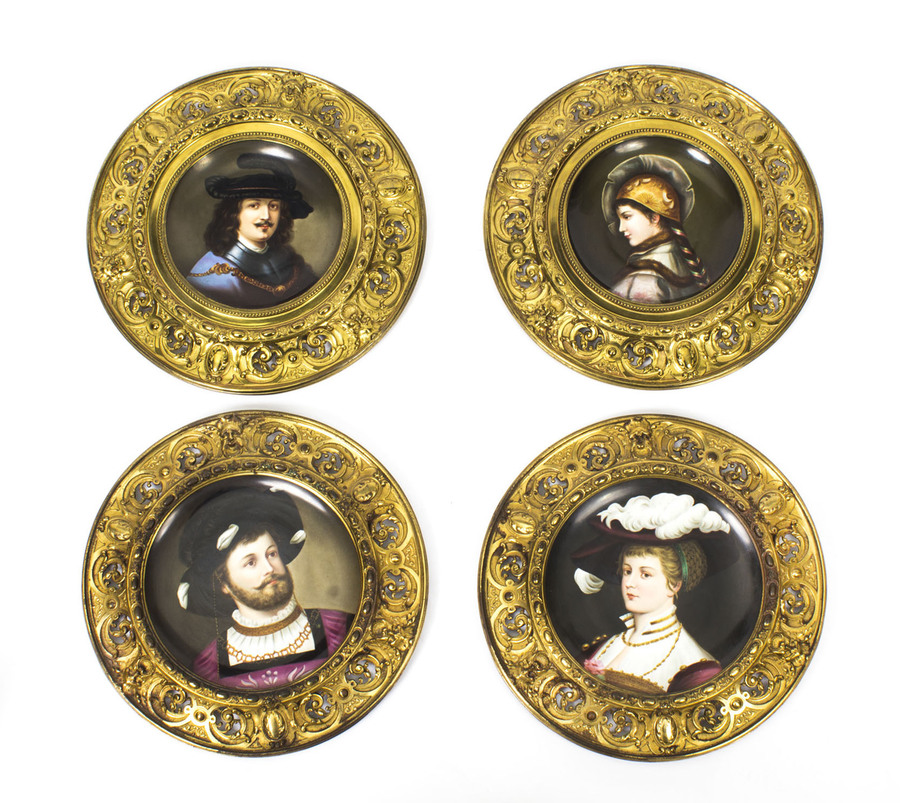 Each plaque features a romantic figure and they are all set in their fabulous original decorative gilded bronze frames.It is a magnificent set which will enhance any interior.Condition:In excellent original condition, please see photos for confirmation.Dimensions in cm:Height 39 x Width 39 x Depth 5Dimensions in inches:Height 1 foot, 3 inches x Width 1 foot, 3 inches x Depth 2 inches
Our reference: 08009
Dresden porcelain - A King's Obsession
In the early 1700s, King Augustus II, prince elector of Saxony, held goldsmith Johann Bottger prisoner and commissioned him to create gold. Bottger instead discovered the method of creating porcelain, a favored and valuable item in the king's eyes.The king announced to Europe in 1710 that he would open a porcelain manufactory in Dresden. He instead opened one at nearby Albrechtsburg castle. Espionage was rampant, and the king guarded his porcelain secret, even though it meant imprisoning workers within the castle walls.By 1720, the secret was leaked and porcelain producers popped up in Vienna and Venice. Dresden porcelain adopted Saxon crossed swords in under-glaze blue as its distinguishing mark.In 1736, the porcelain manufactory produced the "Swan Service." It consists of 1,400 pieces, and is the largest, most lavish porcelain service ever created.In 1872, Dresden built its own manufactory to better establish its role in porcelain production. Ormolu -(from French 'or moulu', signifying ground or pounded gold) is an 18th-century English term for applying finely ground, high-caratgoldin amercuryamalgamto an object ofbronze.The mercury is driven off in akilnleaving behind a gold-coloured veneerknown as'gilt bronze'.The manufacture of true ormolu employs a process known as mercury-gilding orfire-gilding, in which a solution ofnitrate of mercuryis applied to a piece ofcopper,brass, or bronze, followed by the application of anamalgamof gold and mercury. The item was then exposed to extreme heat until the mercury burned off and the gold remained, adhered to the metal object.No true ormolu was produced in France after around 1830 because legislation had outlawed the use of mercury. Therefore, other techniques were used instead but nothing surpasses the original mercury-firing ormolu method for sheer beauty and richness of colour.Electroplatingis the most common modern technique. Ormolu techniques are essentially the same as those used onsilver, to producesilver-gilt(also known asvermeil).