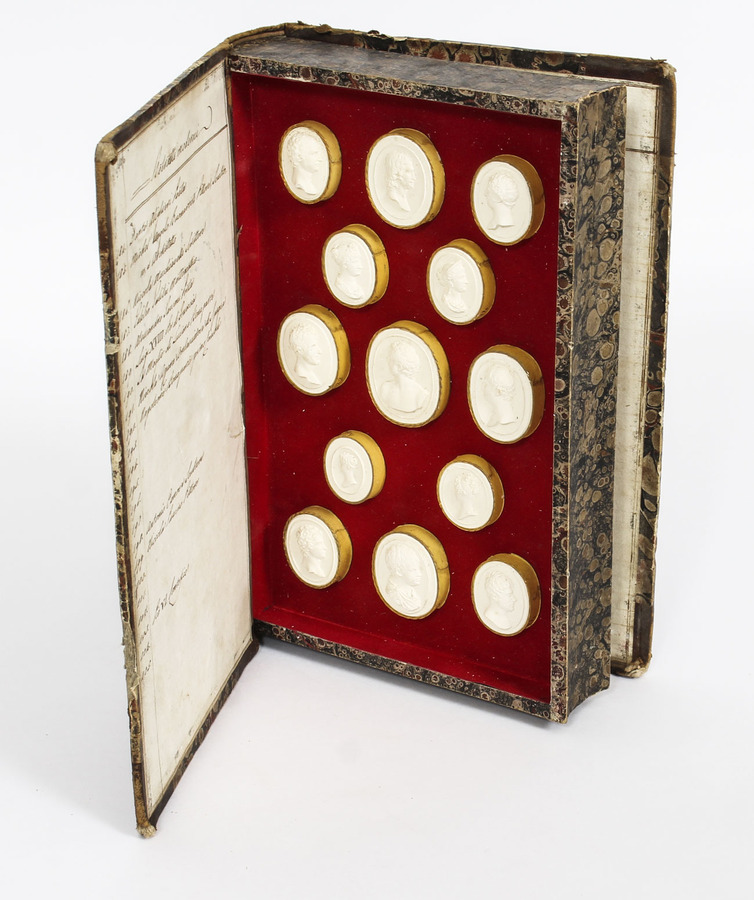 This is a wonderful collection of twenty-eight magnificent plaster Grand Tour intaglios, wonderfullyarranged in two panels of a scholar's book, circa 1820 in date.

The twenty-eight intaglios are of oval-shape and different sizes.Each intaglio has an exquisite gilt gadrooned border and is numbered in black ink. All the impressions are mounted on an elegant red background.
The two compartment of the scholar book features twenty eight bust-length profiles of the greats - ladies and gentlemen - of the Italian Renaissance ('Ritratti Moderni').
Add a classical dimension to your homewith this captivating selection of historicintaglios.Condition:In excellent condition, please see photos for confirmation.Dimensions in cm:Height 25 x Width 16 x Depth 4Dimensions in inches:Height 10 inches x Width 6 inches x Depth 2 inches
Our reference: 09489
Intaglios -were originallyused as seals, these carvings or cuttings are moulded out of white plaster, marble dust or wax.The original 19th-century intaglios were also made from wood or stone. The depressed designs depicting ancient scenes from Greece, Italy, etc were also used as markers of the land. They were also collected as souvenirs from European Grand Tours in 1830.The Grand Tour was the traditional trip of Europe undertaken by mainly upper-class European young men of means. The custom flourished from about 1660 until the advent of large-scale rail transit in the 1840s, and was associated with a standard itinerary.It served as an educational rite of passage. Though primarily associated with the British nobility and wealthy landed gentry, similar trips were made by wealthy young men of Protestant Northern European nations on the Continent, and from the second half of the 18th century some South American, U.S., and other overseas youth joined in. The tradition was extended to include more of the middle class after rail and steamship travel made the journey less of a burden.The primary value of the Grand Tour, it was believed, lay in the exposure both to the cultural legacy ofclassical antiquityand theRenaissance, and to the aristocratic and fashionably polite society of theEuropeancontinent. In addition, it provided the only opportunity to view specific works of art, and possibly the only chance to hear certain music. A grand tour could last from several months to several years. It was commonly undertaken in the company of a knowledgeableguideortutor.The Grand Tour not only provided aliberal educationbut allowed those who could afford it the opportunity to buy things otherwise unavailable at home, and it thus increased participants' prestige and standing. Grand Tourists would return with crates of art, books, pictures, sculpture, and items of culture, which would be displayed in libraries,cabinets, gardens, anddrawing rooms, as well as the galleries built purposely for their display; The Grand Tour became a symbol of wealth and freedom.