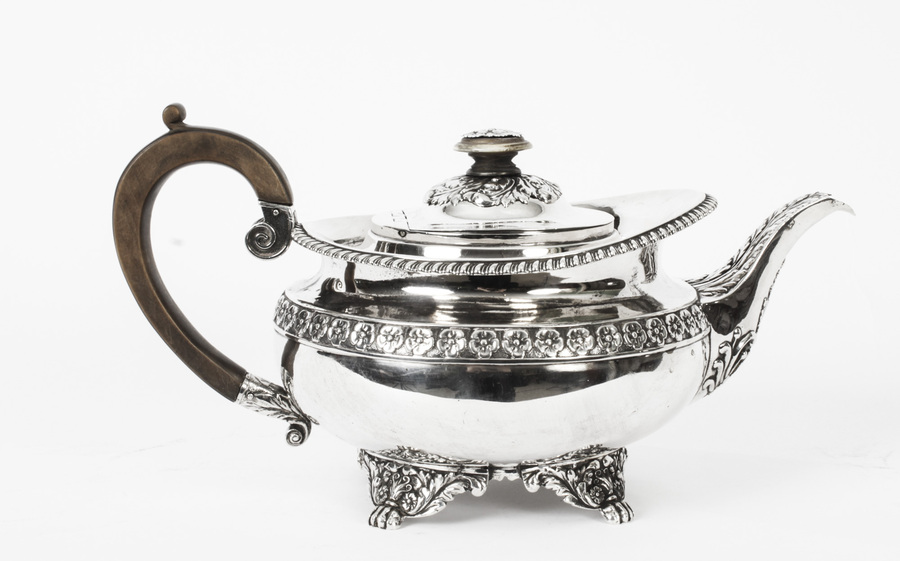 This is a wonderful antique George III sterling silver teapot with the makers mark of one of the most celebrated silversmiths,Craddock & Reid and dated 1820.

It features a squat, globular form with gadroon borders, floral accents, a C-form walnut handle and is raised on foliate scroll feet.
There is no mistaking its unique quality and design, which is sure to make it a treasured piece by any discerning collector.Condition:In excellent condition with clear hallmarks and no dings, dents or signs of repair. Please see photos for confirmation.Dimensions in cm:Height 15 x Width 30 x Depth 17Dimensions in inches:Height 6 inches x Width 1 foot x Depth 7 inches
Our reference: A2519
Joseph Craddock & William Ker ReidThe business was established in Newcastle upon Tyne in 1778 by Christian Ker Reid (1756 - 1834). After his death, the business was continued by his sons William Ker Reid (1787 - 1868), David Reid (1792 - 1869) and Christian Bruce Reid (1805 - 1889). The Reid family were closely related to the Barnard family, as the brothers William Ker and David Reid married Mary and Elizabeth Barnard, daughters of Edward Barnard I, founder of the firm Edward Barnard & Sons. Edward Ker Reid (son of William Ker Reid) married Anna Barnard in 1847, who was the daughter of John Barnard I (they were cousins and both grandchildren of Edward Barnard I). When Christian Bruce Reid retired (1845), his two brothers were joined in the partnership by Christian John Reid (1816 - 1891, son of David Reid). The firm, known as Reid & Sons, was active at 12 Dean Street, 14 Grey Street (1843) and 41 Grey Street, Newcastle (1855). The firm was present at the 1851 Great Exhibition and at the 1862 International Exhibition. In 1858, W.K. Reid left the partnership and the business was continued by David and Christian John Reid. After the death of David Reid (1868), Christian John Reid continued the business with David Reid Jr (1832 - 1914, retired in 1882) and his sons Thomas Arthur Reid (1845 - 1910) and Walter Cecil Reid (born 1846). Later, the business was continued by T.A. and W.C. Reid in partnership with Francis James Langford at 41 Grey Street and 48 Grainger Street, Newcastle. Christian Leopold Reid entered in the partnership when W.C. Reid retired. In 1909, the firm moved to Gem Buildings, Blackett Street, Newcastle, under the management of T.A. Reid, C.L. Reid and William Septimus Leete. In 1930, the firm was converted into a limited liability company under the style of Reid & Sons Ltd. In 1967, Reed & Sons Ltd became a subsidiary of the Northern Goldsmiths Co Ltd. William Ker Reid (maintaining until 1858 the status of absent partner of Reid & Sons, Newcastle) established a business in London in 1812, entering in partnership with Joseph Craddock at 67 Leather Lane. He obtained his freedom of the Goldsmiths Company by Redemption in 1814 and was made a Liveryman in 1818. The partnership Craddock & Reid succeeded to Thomas Guest (before 1792 - 1802), Thomas & Joseph Guest (1805 - 1806) and T.&J. Guest & Joseph Cradock (1806 - 1812). In 1825, William Ker Reid became active on his own account at 5 Bream's Buildings, Chancery Lane, London. In 1847, the firm became W.K. Reid & Son. The partner was his son Edward Ker Reid (1821 - 1886). He was apprenticed to his father obtaining his freedom by Patrimony in 1842 and was made Liveryman in 1848. He managed the business under his own name by 1856. In 1874, the firm moved to Gough Square, Fleet Street, London until his death in 1886.