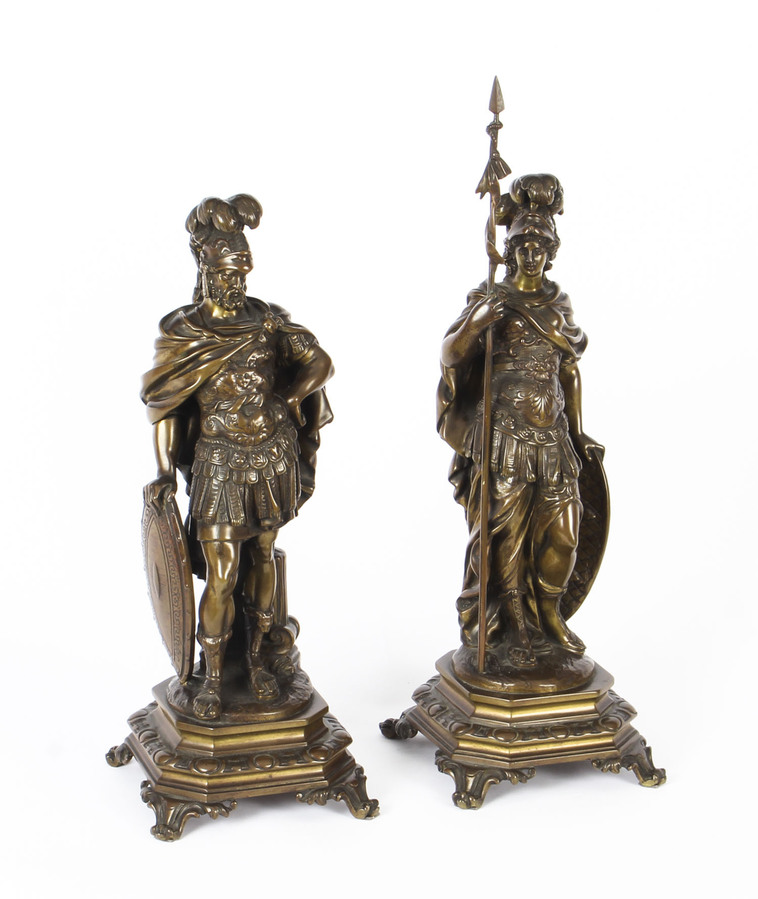 This is a truly stunning antique pair of French patinated-bronzesculptures of Mars and Minerva, dating from C1850 in date.Mars is dressed in his engraved battle armour holding a shield and Minervais dressed in similar fashion with a shield to her right side and a spear to the left, both statues stand on elegant shaped square stepped plinths raised on scroll feet.

Both statues have a lovely medium dark brown patination which is shown in all its glory. These high-quality hot cast solid bronze statues were produced using the traditional "lost wax" process, otherwise known as the "cire perdue" method.The attention to detail here is remarkable and this truly beautiful pair of bronze statues are sure to receive the maximum amount of attention wherever placed.
Condition:In excellent condition, please see photos for confirmation.Dimensions in cm:Height 42 x Width 14 x Depth 14-MinervaHeight 37 x Width 14 x Depth 14-MarsDimensions in inches:Height 1 foot, 4 inches x Width 5 inches x Depth 5 inches-MinervaHeight 1 foot, 3 inches x Width 5 inches x Depth 5 inches-Mars
Our reference: A1565
Minerva and MarsMinerva is the Roman goddess of wisdom and strategic warfare, and the sponsor of arts, trade, and strategy. Minerva is not a patron of violence such as Mars, but of defensive war only. From the second century BC onward, the Romans equated her with the Greek goddess Athena. Minerva is one of the three Roman deities in the Capitoline Triad, along with Jupiter and Juno.
She was the virgin goddess of music, poetry, medicine, wisdom, commerce, weaving, and the crafts. She is often depicted with her sacred creature, an owl usually named as the "owl of Minerva", which symbolised her association with wisdom and knowledge as well as, less frequently, the snake and the olive tree.Minerva is commonly depicted as tall with an athletic and muscular build, as well as wearing armour and carrying a spear. Marcus Terentius Varro considered her to be ideas and the plan for the universe personified.Mars was the Roman god of war and second only to Jupiter in the Roman pantheon. Although most of the myths involving the god were borrowed from the Greek god of war Ares, Mars, nevertheless, had some features which were uniquely Roman. Considered more level-headed than the often impulsive and disruptive Ares, Mars was also seen as a more virtuous figure by the more martial-oriented Romans. As a protector of Rome and the Roman way of life and as a defender of city borders and frontiers, important festivals connected to warfare were held in his honour and the god was also closely associated with the wolf and woodpecker.Mars was considered the father of Romulus and Remus, the mythical twin founders of Rome. According to the story, their mother, the Vestal Virgin Rhea Silvia, was raped by Mars while she slept, and in her dreams she had a vision where she dropped a hairpin to the ground, and from which there sprang two twin trees. Over time one of the trees grew so large that it covered the entire world with its shade, a reference to the ultimate success of Romulus and the growth of the huge Roman Empire.
Another myth concerning the god of war, this one uniquely Roman, was his marriage to Anna Perenna. The story is re-told in Ovid's Fasti and begins with Mars falling in love with no less a figure than Minerva, but the virgin goddess of wisdom and crafts, wholly unimpressed, rejected his amorous advances. Wondering how he could better impress Minerva and win her favour, Mars sought the help of Anna Perenna, the aged goddess of New Year and Time. However, Anna Perenna quite fancied the handsome war god for herself, and so she double-crossed Mars by disguising herself as Minerva and, wearing a veil, she tricked the god into marrying her. This famous episode of feminine guile was commemorated in Rome on the Ides of March (the 15th) when young girls would sing risqué songs.