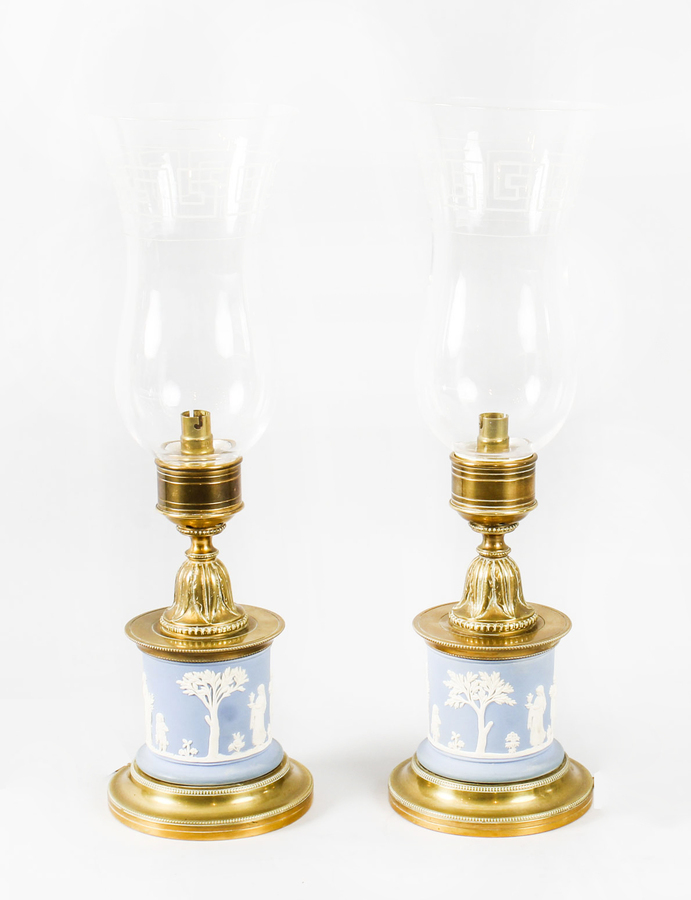 This is a stunning English pair of antiqueormolu and Jasperware table lamps which have been skillfully converted for electricity,circa 1890 in date.

These elegant lamps have splendid Jasperware cylindrical bases which feature classical figures that are surmounted with ormolu mounts decorated with beading and acanthus leaves.The sophisticatedhand-blown glass storm shades feature a splendid etched Greek-key motif at the top.The unique quality and design of these table lights will soon instantly enhance the style of one special room in your home.
Condition:In excellent condition having been beautifully cleaned, rewired and PAT tested in our workshops, please see photos for confirmation.
Dimensions in cm:Height 40 x Width 12 x Depth 12Dimensions in inches:Height 1 foot, 4 inches x Width 5 inches x Depth 5 inches
Our reference: 09515
Jasperware
or jasper ware, is a type ofstonewarefirst developed byJosiah Wedgwood, although some authorities have described it as a type ofporcelain. It is noted for its matte finish and is produced in a number of different colours, of which the best known is a pale blue that has become known as'Wedgwood Blue'."Jasper" in this context refers to the mineral of that name.Wedgwood'smain designs are jasperware and black basalt.Many of the Wedgwood designs were based on the art of makingcameo glassand on the looks ofThe Portland Vase.
Ormolu(from French 'or moulu', signifying ground or pounded gold) is an 18th-century English term for applying finely ground, high-caratgoldin amercuryamalgamto an object ofbronze.The mercury is driven off in akilnleaving behind a gold-coloured veneerknown as'gilt bronze'.The manufacture of true ormolu employs a process known as mercury-gilding orfire-gilding, in which a solution ofnitrate of mercuryis applied to a piece ofcopper,brass, or bronze, followed by the application of anamalgamof gold and mercury. The item was then exposed to extreme heat until the mercury burned off and the gold remained, adhered to the metal object.No true ormolu was produced in France after around 1830 because legislation had outlawed the use of mercury. Therefore, other techniques were used instead but nothing surpasses the original mercury-firing ormolu method for sheer beauty and richness of colour.Electroplatingis the most common modern technique. Ormolu techniques are essentially the same as those used onsilver, to producesilver-gilt(also known asvermeil).
Greek keyAmeanderormeandros(Greek:?a?a?d???) is a decorative border constructed from a continuous line, shaped into a repeated motif. Such a design is also called theGreek fretorGreek keydesign, although these are modern designations.On the one hand, the name "meander" recalls the twisting and turning path of the Maeander Riverin Asia Minor, and on the other hand, as Karl Kerenyipointed out, "the meander is the figure of a labyrinthin linear form". Among some Italians, these patterns are known as Greek Lines. Usually the term is used for motifs with straight lines and right angles; the many versions with rounded shapes are called running scrolls running scrolls.Meanders are common decorative elements in Greekand Roman art. In ancient Greecethey appear in many architectural friezes, and in bands on the pottery of ancient Greece from the Geometric Periodonwards. The design is common to the present-day in classicizing architecture. The meander is a fundamental design motif in regions far from a Hellenic orbit: labyrinthine meanders ("thunder" pattern) appear in bands and as infill on Shang bronzes, and many traditional buildings in and around China still bear geometric designs almost identical to meanders.They were among the most important symbols in ancient Greece; and perhaps symbolized infinity and unity; many ancient Greek temples incorporated the sign of the meander. Greek vases, especially during their Geometric Period, were probably the main reason for the widespread use of meanders; alternatively, very ocean-like patterns of waves also appeared in the same format as meanders, which can also be thought of as the guillochepattern. The shield of Philip II of Macedon, conserved in the museum of Vergina, is decorated with multiple symbols of the meander. Meanders are also prevalent on the pavement mosaics found in Roman villas throughout the Roman empire. A good example is at the Chedworth Roman Villain England, leading manyhistorians to believe that the pattern was part of the original inspiration for the Latin "G" character.Meanders and their generalizations are used with increasing frequency in various domains of contemporary art. The painter Yang Liu, for example, has incorporated smooth versions of the traditional Greek Key (also called Sona drawing, Sand drawing, and Kolam) in many of her paintings.In Modern Greece, a black, white, and red meander is the symbol of the far-right political party Golden Dawn.