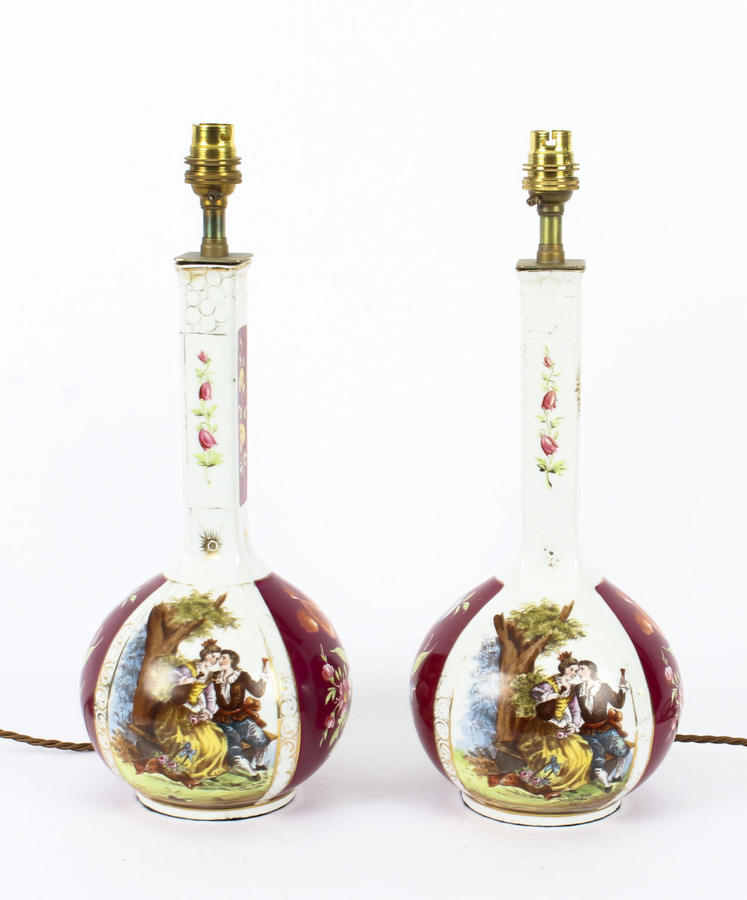 This is an exquisite and large pair of German Dresden style porcelain lamps dating from the early 20th Century.

The lamps are decorated with four alternate panels, two of which depicting lovers into a naturalistic landscape with foliage, bushes and trees. The other two panels depict a variety of flowers against a red background.These were originally a pair of vases that have been skillfully converted for electricity into these superb lamps.Condition:Offered in excellent condition having been rewired and in full working order.Dimensions in cm:Height 39 x Width 17 x Depth 17Dimensions in inches:Height 1 foot, 3 inches x Width 7 inches x Depth 7 inches
Our reference: 09379
Dresden porcelain - A King's Obsession
In the early 1700s, King Augustus II, prince elector of Saxony, held goldsmith Johann Bottger prisoner and commissioned him to create gold. Bottger instead discovered the method of creating porcelain, a favored and valuable item in the king's eyes.The king announced to Europe in 1710 that he would open a porcelain manufactory in Dresden. He instead opened one at nearby Albrechtsburg castle. Espionage was rampant, and the king guarded his porcelain secret, even though it meant imprisoning workers within the castle walls.By 1720, the secret was leaked and porcelain producers popped up in Vienna and Venice. Dresden porcelain adopted Saxon crossed swords in under-glaze blue as its distinguishing mark.In 1736, the porcelain manufactory produced the "Swan Service." It consists of 1,400 pieces, and is the largest, most lavish porcelain service ever created.In 1872, Dresden built its own manufactory to better establish its role in porcelain production.