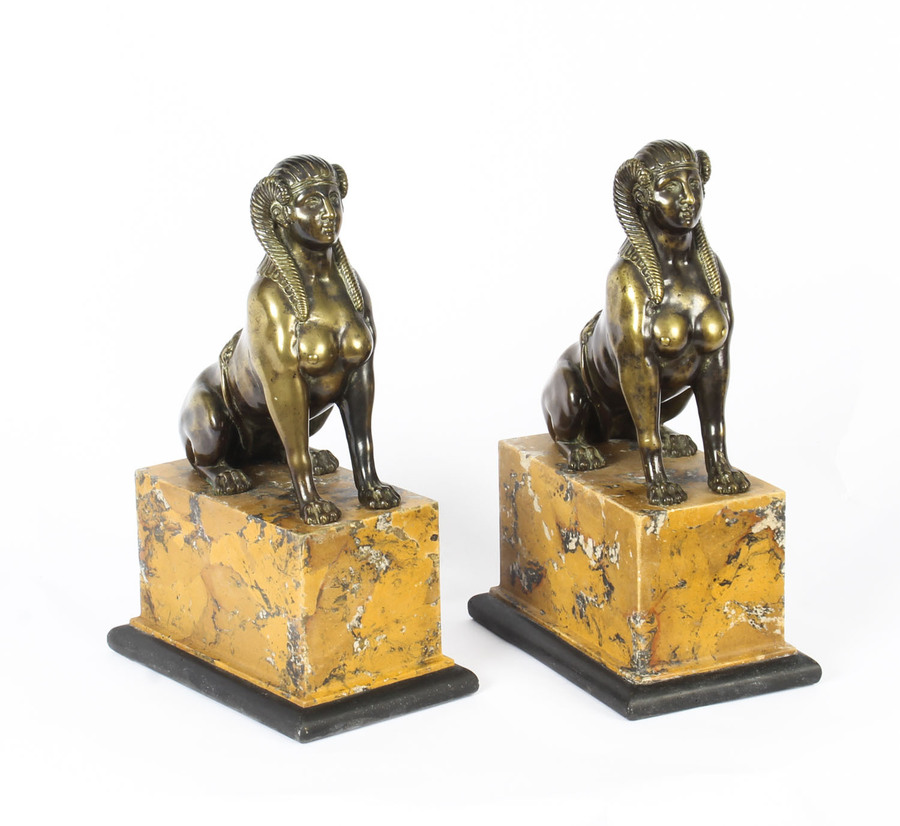 This is a truly superb large pair of antique French Grand Tour Empire Egyptian Campaign bronzes modelled as Sphinxes, circa 1820 in date

The sculptures features a pair of patinated bronze sphinxes beautifully sculpted in an upright seated postion and mounted on decorative scagliola and black marble plinth bases.
The craftsmanship is second to none throughout all aspects of this pair and they are sure to add an unparalleled touch of elegance to your home.Condition:In excellent condition. Asantique items, the pieces show signs of use commensurate with age, these minor condition issues are mentioned for accuracy and, as seen in the accompanying photographs, the sphinxes display beautifully.Dimensions in cm:Height 36 x Width 15 x Depth 23Dimensions in inches:Height 1 foot, 2 inches x Width 6 inches x Depth 9 inches
Our reference: A1547
The Grand Tour was the traditional trip of Europe undertaken by mainly upper-class European young men of means. The custom flourished from about 1660 until the advent of large-scale rail transit in the 1840s, and was associated with a standard itinerary.It served as an educational rite of passage. Though primarily associated with the British nobility and wealthy landed gentry, similar trips were made by wealthy young men of Protestant Northern European nations on the Continent, and from the second half of the 18th century some South American, U.S., and other overseas youth joined in. The tradition was extended to include more of the middle class after rail and steamship travel made the journey less of a burden.The primary value of the Grand Tour, it was believed, lay in the exposure both to the cultural legacy ofclassical antiquityand theRenaissance, and to the aristocratic and fashionably polite society of theEuropeancontinent. In addition, it provided the only opportunity to view specific works of art, and possibly the only chance to hear certain music. A grand tour could last from several months to several years. It was commonly undertaken in the company of a knowledgeableguideortutor.The Grand Tour not only provided aliberal educationbut allowed those who could afford it the opportunity to buy things otherwise unavailable at home, and it thus increased participants' prestige and standing. Grand Tourists would return with crates of art, books, pictures, sculpture, and items of culture, which would be displayed in libraries,cabinets, gardens, anddrawing rooms, as well as the galleries built purposely for their display; The Grand Tour became a symbol of wealth and freedom.
Empire style,
is an early-19th-centurydesignmovement inarchitecture,furniture, otherdecorative arts, and thevisual artsfollowed in Europe and America until around 1830.The style originated in and takes its name from the rule ofNapoleon Iin theFirst French Empire, where it was intended to idealize Napoleon's leadership and the French state. The style corresponds to theBiedermeierstyle in the German-speaking lands,Federal stylein the United States and to theRegency stylein Britain. The previous style was calledLouis XVI style, in France.The Empire style was based on aspects of the Roman Empire. It is the second phase of neoclassicism which is also called "Directoire", after a goverment system.
Furniture typically had symbols and ornaments borrowed from the glorious ancient Greek and Roman empires.The furniture was made from heavy woods such asmahoganyandebony, imported from the colonies, with dark finishes often with decorative bronze mounts. Marble tops were popular as were Egyptian motifs like sphinxes, griffins, urns and eagles and the Napoleonic symbols, the eagle, the bee, the initials "I" and a large "N."
Gilded bronze (ormolu) details displayed a high level of craftsmanship.