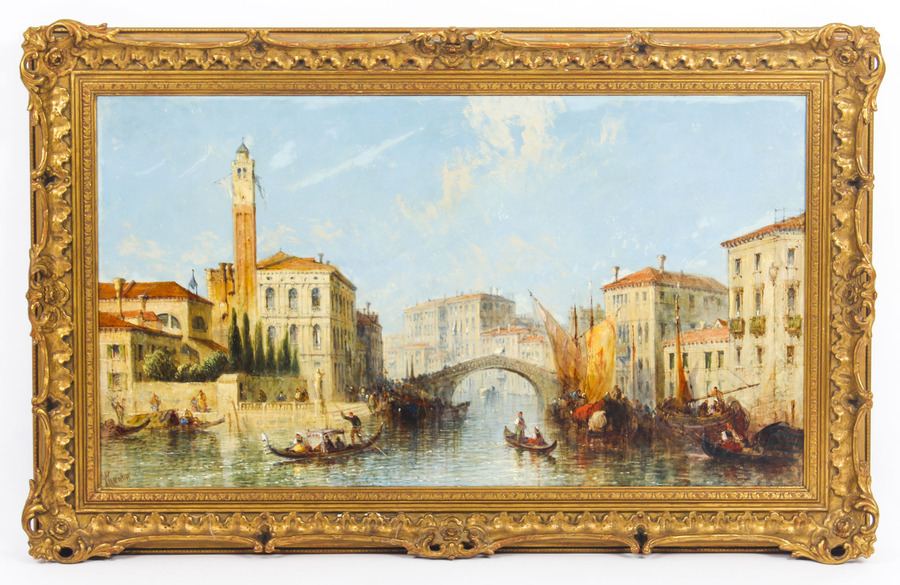 This is a stunning painting of the most painted city in the history of art - Venice.It is housed in it's original and beautiful gilt gallery frame and signed lower left.The banks of the Grand Canal are lined with more than 170 buildings, most of which date from the 13th to the 18th century, and demonstrate the welfare and art created by the Republic of Venice. The noble Venetian families faced huge expenses to show off their richness in suitable palazzos; this contest reveals the citizens' pride and the deep bond with the lagoon. Amongst the many are the Palazzi Barbaro, Ca' Rezzonico, Ca' d'Oro, Palazzo Dario, Ca' Foscari, Palazzo Barbarigo and to Palazzo Venier dei Leoni, housing the Peggy Guggenheim Collection. The churches along the canal include the basilica of Santa Maria della Salute. Centuries-old traditions, such as the Historical Regatta, are perpetuated every year along the Canal.Because most of the city's traffic goes along the Canal rather than across it, only one bridge crossed the canal until the 19th century, the Rialto Bridge.The painting delightfully presents the Grand Canal with its beautiful buildings on water, gondolas and sailboats. The artist used very delicate pastel colours and has succeeded in adding some mystery to the sceneryProvenance:Purchased in 1983 from Galerie George in George Street, London.Auctions:Jane Vivian is a British painter. Many works by the artist have been sold at auction, including 'On the Grand Canal, looking towards the Ca' labia, Venice' sold at Christie's South Kensington 'British and Victorian Pictures' in 2006 for $20,945.
Condition:In really excellent condition, please see photos for confirmation.Dimensions in cm:Height 97 x Width 61 x Depth 6-FrameHeight 82 x Width 46-CanvasDimensions in inches:Height 3 foot, 2 inches x Width 2 foot x Depth 2 inches-FrameHeight 2 foot, 8 inches x Width 1 foot, 6 inches-Canvas
Our reference: 09028
Jane Vivian de Fleury ( Active 1869-1890 )Jane Vivian was a landscape painter who lived in London. She is known particularly for her views of Venice and exhibited a number of works at the Society of British Artists, including views of Venice, Bruges, and Rouen. She also exhibited at several provincial galleries including the Royal Society of Artists, Birmingham, The Walker Art Gallery in Liverpool, Manchester City Gallery, and the Royal Hibernian Academy.She came from a dynasty of topographical artists who worked and lived in England.J de Fleury was active and successful from 1799 to 1823. He was a landscape painter who mainly worked in Wales but lived in London and was a regular exhibitor in the major London exhibitions between 1799 & 1823.His son J. Vivian de Fleury painted mainly abroad, and specialized in views of Switzerland and Italy. He exhibited between 1847 & 1868 and had many addresses in London during this time.Miss J. Vivian first exhibits a view of Venice from a London address in 1869 and continues to exhibit mainly Italian views until 1877. Around 1880 she seems to have moved, as did her father, as their next exhibiting address is Islington Row, Birmingham where she continued to exhibit work until 1888. The name J.V. de Fleury reappears at the Birmingham Society exhibitions in 1892 & 1893. Her work shows an attention to detail that is a reflection of her father's technique but there is a lightness of touch and softness in the palate, which is considered even finer.