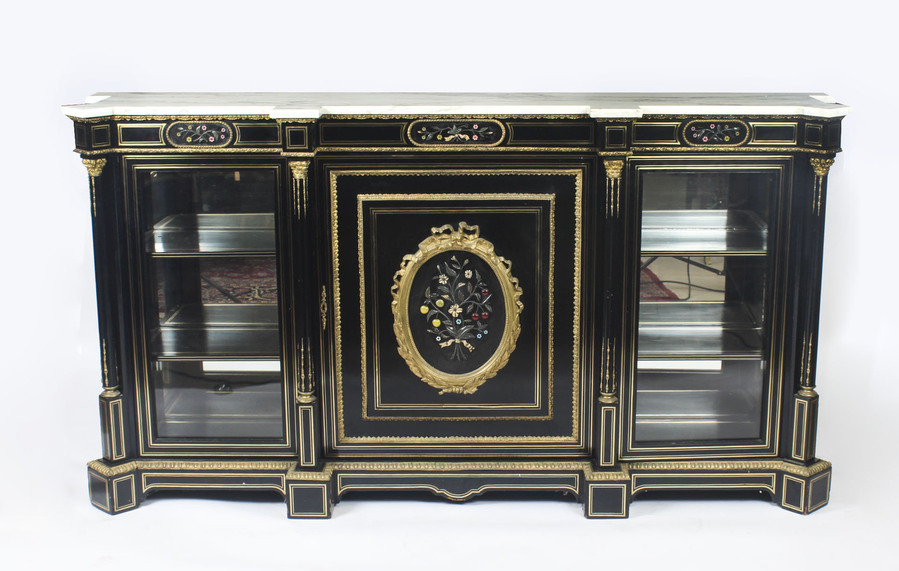 This credenza has a panelled door in the centre which has intricate hand cut pietradurafloral decoration set within a fabulous gilt bronze mount, and there are three more pietradura panels along the frieze, one above each door.The central door opens to reveal a gray lacquered interior with two shelves. It has a glazed door at either end, each opens to a cupboard with a mirrored back and two ebonised shelves with brass inlaid decoration. It has four imposing Corinthian columns with gilded ormolu capitelli and is surmounted with a beautiful white "Marmo diCarrara" marble top, that adds the finishing touch to this elegant piece.Oozing sophistication and charm, this credenza is the absolute epitome of Victorian high society. Its attention to detail and lavish decoration are certain to draw the eye wherever you choose to place it in your home.
Condition:In excellent condition having been beautifully cleaned and waxed, please see photos for confirmation.Dimensions in cm:Height 106 x Width 201 x Depth 47Dimensions in inches:Height 3 foot, 6 inches x Width 6 foot, 7 inches x Depth 1 foot, 6 inches
Our reference: 09136
Pietra dura is a term for the inlay technique of using cut and fitted, highly polished coloured stones to create images. It is considered a decorative art.
Pietre dure is an Italian plural meaning "hard rocks" or hardstones; the singular pietra dura is also encountered in Italian. In Italian, but not in English, the term embraces all gem engraving and hardstone carving, which is the artistic carving of three-dimensional objects in semi-precious stone, normally from a single piece, for example in Chinese jade.
The traditional convention in English has been to use the singular pietra dura just to denote multi-colored inlay work. However, in recent years there has been a trend to use pietre dure as a term for the same thing, but not for all of the techniques it covers, in Italian.
But the title of a 2008 exhibition at the Metropolitan Museum of Art, New York, Art of the Royal Court: Treasures in Pietre Dure from the Palaces of Europe used the full Italian sense of the term, probably because they thought that it had greater brand recognition. The material on the website speaks of objects such as a vase in lapis lazuli as being examples of "hardstone carving (pietre dure)"
The Victoria & Albert Museum in London uses both versions on its website, but uses pietra dura. "A method of inlaying coloured marbles or semi-precious stones into a stone base, often in geometric or flower patterns...."
Giovanni Montelatici (1864-1930) was an Italian Florentine artist whose brilliant work has been distributed across the world by tourists and collectors. Owners of Giovanni's work included Donald Trump.
Carrara marble, is a type of white or blue-grey marble popular for use in sculpture and building decor. It is quarried at the city of Carrara in the province of Massa-Carrara (Tuscany, Italy).Carrara marble has been used since the time of Ancient Rome; the Pantheon and Trajan's Column in Rome are constructed of it. Many sculptures of the Renaissance, such as Michelangelo's David, were carved from Carrara marble. For Michelangelo at least, Carrara marble was valued above all other stone, except perhaps that of his own quarry in Pietrasanta. The Marble Arch in London and the Duomo di Siena are also made from this stone, as are the interiors of Manila Cathedral, the cold-white marbles of the Sheikh Zayed Mosque and the campus of Harvard Medical School.Ormolu(from French 'or moulu', signifying ground or pounded gold) is an 18th-century English term for applying finely ground, high-caratgoldin amercuryamalgamto an object ofbronze.The mercury is driven off in akilnleaving behind a gold-coloured veneerknown as'gilt bronze'.The manufacture of true ormolu employs a process known as mercury-gilding orfire-gilding, in which a solution ofnitrate of mercuryis applied to a piece ofcopper,brass, or bronze, followed by the application of anamalgamof gold and mercury. The item was then exposed to extreme heat until the mercury burned off and the gold remained, adhered to the metal object.No true ormolu was produced in France after around 1830 because legislation had outlawed the use of mercury. Therefore, other techniques were used instead but nothing surpasses the original mercury-firing ormolu method for sheer beauty and richness of colour.Electroplatingis the most common modern technique. Ormolu techniques are essentially the same as those used onsilver, to producesilver-gilt(also known asvermeil).