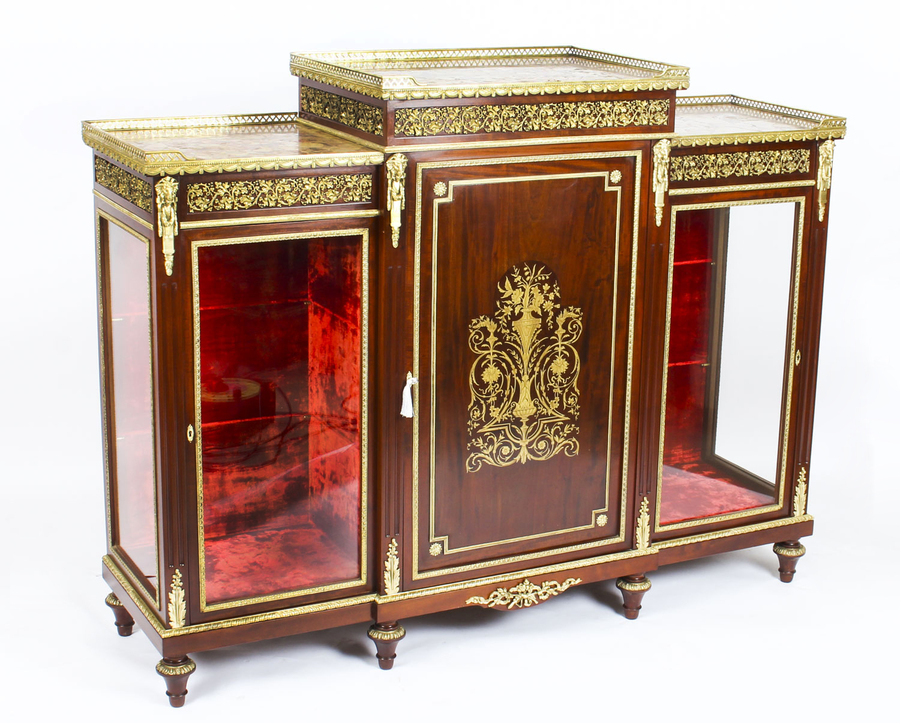 This striking credenza is profuselydecorated with fabulousormolu mounts and a striking central panel of cut brass Boullescrolling foliage, flowers and urns.The central cupboard door opens to reveal a spacious mahogany interior with two shelves. The side cupboards have glazed panelled doors and sides with a pair of glass shelves in each, and they are lined in the original red velvet.It is surmounted with a superb decorative top, in three sections, with a raised central section. The friezes with incredibly detailed floral ormolu mounts and the tops with brass galleries inset with decorative colured marble.It is raised on eight tapering toupie feet with ormolu mounts. It is a true exhibition quality piece!
Condition:In excellent condition having been beautifully cleaned, polished and waxed in our workshops, please see photos for confirmation.Dimensions in cm:Height 107 x Width 151 x Depth 46Dimensions in inches:Height 3 foot, 6 inches x Width 4 foot, 11 inches x Depth 1 foot, 6 inches
Our reference: 09928a
André-Charles Boulle (1642 – 1732), was the French cabinetmaker who is generally considered to be the preeminent artist in the field of marquetry. His fame in marquetry led to his name being given to a fashion of inlaying known as Boulle (or in 19th-century Britain, Buhl work).Boulle appears to have been originally a painter, since the first payment to him by the crown of which there is any record (1669) specifies ouvrages de peinture. He was employed for many years at Versailles, where the mirrored walls, the floors of wood mosaic, the inlaid paneling and the marquetery furniture in the Cabinet du Dauphin were regarded as his most remarkable work. These rooms were long since dismantled and their contents dispersed, but Boulle's drawings for the work are in the Musée des Arts Décoratifs, Paris.His royal commissions were numerous, as we learn both from the Comptes des B timents du Roi and from the correspondence of Louvois. Not only the most magnificent of French monarchs, but foreign princes and the great nobles and financiers of his own country crowded to him with commissions, and the mot of the abbé de Marolles, Boulle y lourne en ovale, has become a stock quotation in the literature of French cabinetmaking.Flame Mahogany
Thomas Sheraton-18thcentury furniture designer, once characterized mahogany as "best suited to furniture where strength is demanded as well as a wood that works up easily, has a beautiful figure and polishes so well that it is an ornament to any room in which it may be placed." Matching his words to his work, Sheraton designed much mahogany furniture. The qualities that impressed Sheraton are particularly evident in a distinctive pattern of wood called "flame mahogany."The flame figure in the wood is revealed by slicing through the face of the branch at the point where it joins another element of the tree.Ormolu -(from French 'or moulu', signifying ground or pounded gold) is an 18th-century English term for applying finely ground, high-caratgoldin amercuryamalgamto an object ofbronze.The mercury is driven off in akilnleaving behind a gold-coloured veneerknown as'gilt bronze'.The manufacture of true ormolu employs a process known as mercury-gilding orfire-gilding, in which a solution ofnitrate of mercuryis applied to a piece ofcopper,brass, or bronze, followed by the application of anamalgamof gold and mercury. The item was then exposed to extreme heat until the mercury burned off and the gold remained, adhered to the metal object.After around 1830 because legislation had outlawed the use of mercury other techniques were used instead.Electroplatingis the most common modern technique. Ormolu techniques are essentially the same as those used onsilver, to producesilver-gilt..