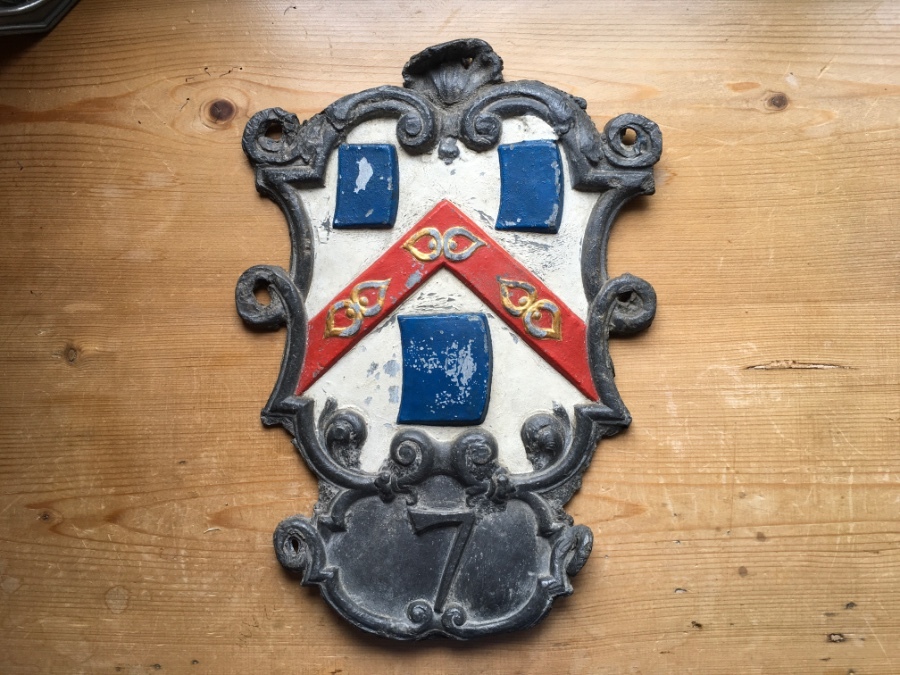 BIBURY ANTIQUES FAIR 2020 has 36 antiques for sale.
click here to see them all

Early 19th century lead wall plaque. This was used to signify that a property was owned by the Livery Company.

The Company is tenth in order of precedence and is, therefore, one of the Great Twelve Livery Companies. It has about two hundred and eighty freemen. One hundred and thirty of them are liverymen, of whom thirty eight are on the Court, and the rest are freemen.
In the City of London there are one hundred and eight Livery Companies. The older ones began as trade guilds, associations of persons aimed at protecting and regulating their various trades, by insisting on certain standards of material and craftsmanship and caring for their less fortunate members. Through the ages, the Companies became influential in the government of the City, and became recognised as suitable bodies to which benefactors could entrust charitable monies.They are called Livery Companies because in the early 14th century many of them assumed distinctive dress and Edward III was known to have been clothed in his livery when attending the Merchant Taylors.
Note: Some damage to paint as would be expected on an item of this age. Also the lead has been bent in a couple of places as can be seen in the photos.

Bibury Antiques Fair is a small group of dealers in an attractive Cotswold village. We may well be a small fair, but we have fabulous stock, and in Bibury, one can peruse and purchase, a selection of Jewellery, Ceramics, Glass, Silver, Pictures, Brass, and even some clocks and furniture! No longer does one have to wait for the first Sunday in the month, with a winter closure, we have items available now, on antiques.co.uk maybe see you there. My restoration of furniture business contact page is https://andybriggs.business.site/ Thanks, Andy.

BIBURY ANTIQUES FAIR 2020 has 36 antiques for sale.
click here to see them all