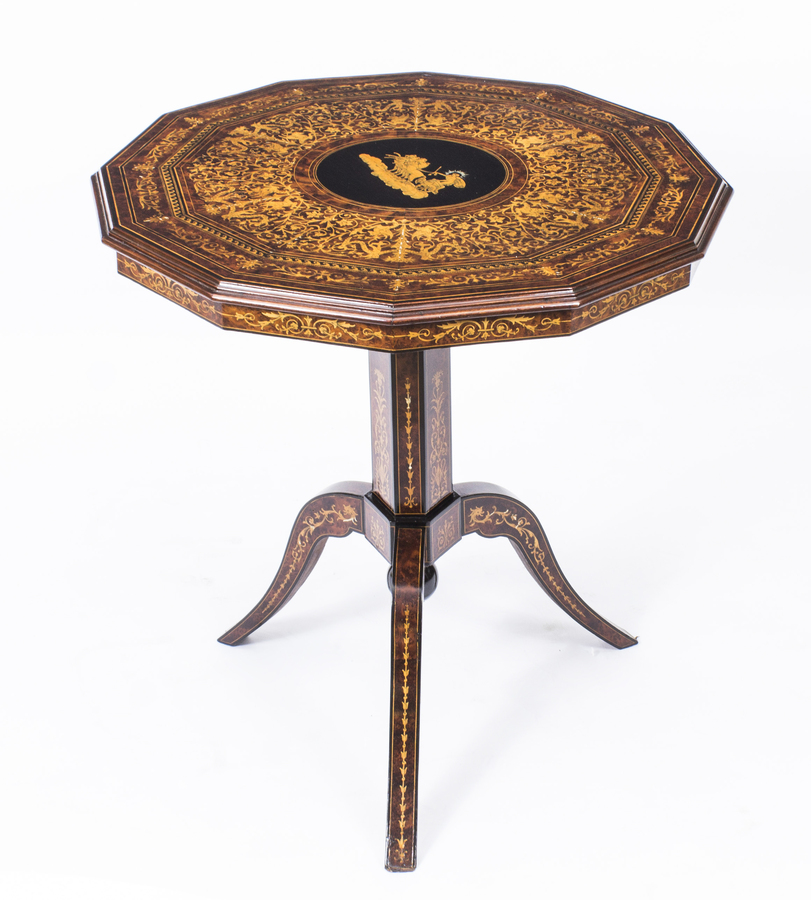 This is a beautiful and rare antique Italian Sorrento marquetry tilt top occasional table of exhibition quality, circa 1830 in date.

It was hand crafted from burr walnut, exotic specimen woods andolivewood. The twelve sided top richly inlaid and having a figural scene with inlaid details to the centre within bands of intricate marquetry. The central panel depicting the Greek God Helios, the personification of the sun in Greek mythology, driving his chariot of the sun across the sky.The table is raised on a triangular central pedestal that terminates in three elegant splayed legs all masterfully inlaid in foliate patterns.The top can be tilted into various positions to display the intricate marquetry decoration perfectly.It is a lovely and decorative piece will enhance most interiors.Condition:In excellent condition having been beautifully cleaned and waxed in our workshops, please see photos for confirmation.Dimensions in cm:Height 65 x Width 63 x Depth 63Dimensions in inches:Height 2 foot, 2 inches x Width 2 feet, 1 inch x Depth 2 feet, 1 inch
Our reference: 08454
Helios
Was the personification of the Sun in Greek mythology. He is the son of the Titan Hyperion and the Titaness Theia, also known as Euryphaessa and brother of the goddesses Selene, the moon, and Eos, the dawn.Helios was described as a handsome titan crowned with the shining aureole of the Sun, who drove the chariot of the sun across the sky each day to earth-circling Oceanus and through the world-ocean returned to the East at night. In the Homeric hymn to Helios, Helios is said to drive a golden chariot drawn by steeds and Pindar speaks of Helios's "fire-darting steeds" Still later, the horses were given fire related names: Pyrois, Aeos, Aethon, and Phlegon.As time passed, Helios was increasingly identified with the god of light, Apollo The equivalent of Helios in Roman mythology was Sol.
Walnutrefers to the swirling figure present in nearly all walnut when cut and polished, and especially in the wood taken from the base of the tree where it joins the roots. However the true burr is a rare growth on the tree where hundreds of tiny branches have started to grow. Burr walnut produces some of the most complex and beautiful figuring you can find.Olive
is a smalltreeorshrubthat grows up to 8–15mtall withthornybranches. The wood of that tree is very hard and therefore suitable for making furniture. The tree main producers in Europe are: Spain, Italy and Turkey.
Marquetry
is decorative artistry where pieces of material (such as wood, mother of pearl, pewter, brass silver or shell) of different colours are inserted into surface wood veneer to form intricate patterns such as scrolls or flowers.The technique of veneered marquetry had its inspiration in 16th century Florence. Marquetry elaborated upon Florentine techniques of inlaying solid marble slabs with designs formed of fitted marbles, jaspers and semi-precious stones. This work, called opere di commessi, has medieval parallels in Central Italian "Cosmati"-work of inlaid marble floors, altars and columns. The technique is known in English as pietra dura, for the "hardstones" used: onyx, jasper, cornelian, lapis lazuli and colored marbles. In Florence, the Chapel of the Medici at San Lorenzo is completely covered in a colored marble facing using this demanding jig-sawn technique.Techniques of wood marquetry were developed in Antwerp and other Flemish centers of luxury cabinet-making during the early 16th century. The craft was imported full-blown to France after the mid-seventeenth century, to create furniture of unprecedented luxury being made at the royal manufactory of the Gobelins, charged with providing furnishings to decorate Versailles and the other royal residences of Louis XIV. Early masters of French marquetry were the Fleming Pierre Golle and his son-in-law, André-Charles Boulle, who founded a dynasty of royal and Parisian cabinet-makers (ébénistes) and gave his name to a technique of marquetry employing shell and brass with pewter in arabesque or intricately foliate designs.