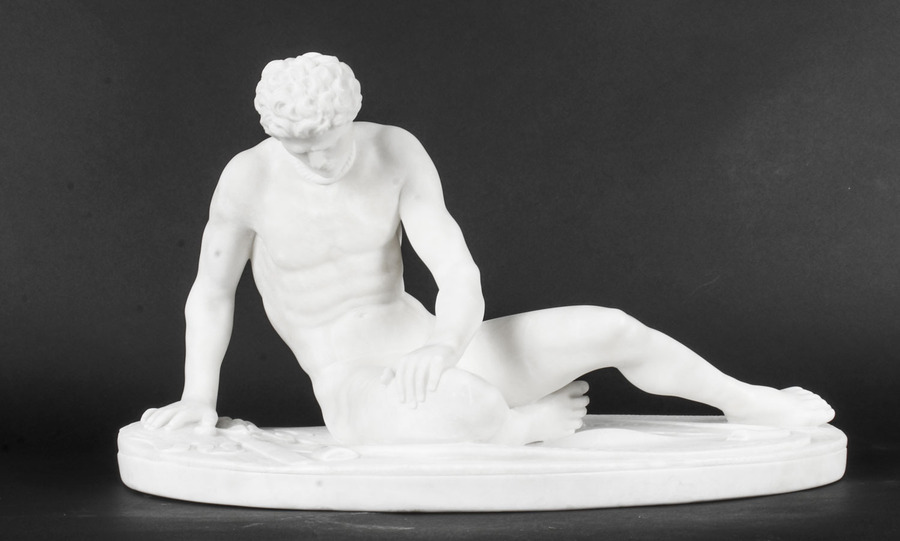 This is a truly magnificent antique Italian Grand Tour white alabaster sculpture of the Dying Gaul, circa 1860 in date.

This striking classical sculpture is after the original antique Roman marble sculpture found in the Capitoline Museum in the early 17th Century, which is itself a copy of an ancient Hellenistic bronze sculpture commissioned by Attalus of Pergamon in 230-220 BC to celebrate his victory over the Galatians.This exquisitely executed carved sculpture depicts the wounded naked dying gladiator with remarkable realism and pathos. He is beautifully featured as a Celtic warrior with curly hairstyle and has a characteristic band of twisted metal around his neck. He lies on his fallen shield while his sword lies beside him on the right-hand side and his head is looking downward in dignified sorrow.Like the original antique Roman sculpture, it is raised on a beautiful oval white alabaster base, which is very appropriate to highlight the figure.The attention to detail throughout this piece is second to none.Add a classical dimension to your home with this captivating Italian Grand Tour sculpture.Condition:In excellent condition.
Please refer to pictures.Dimensions in cm:Height 28 x Width 49 x Depth 26Dimensions in inches:Height 11 inches x Width 1 foot, 7 inches x Depth 10 inches
Our reference: 09984
TheDyingGaul(inItalian:Galata Morente), formerly known as theDying Gladiator, is an ancientRomanmarblecopy of a lostHellenisticsculpture that is thoughtto have been executed inbronze, which was commissioned some time between 230 BC and 220 BC byAttalus IofPergamonto celebrate his victory over the CelticGalatiansinAnatolia.The present base was added after its rediscovery. The identity of the sculptor of the original is unknown, but it has been suggested thatEpigonus, the court sculptor of theAttalid dynastyof Pergamon, may have been its sculptor.The statue depicts a dyingCeltwith remarkable realism, particularly in the face, and may have been painted.He is represented as aGallicwarrior with a typically Gallic hairstyle and moustache. He lies on his fallen shield while his sword and other objects lie beside him.The statue was most commonly known as theDying Gladiatoruntil the twentieth century,on the assumption that it depicted a wounded gladiator in the Roman amphitheatre. Scholars had identified it as aGaulby the mid nineteenth century, but it took many decades for the new label to become the norm.The Grand Tourwas the traditional trip of Europe undertaken by mainly upper-class European young men of means. The custom flourished from about 1660 until the advent of large-scale rail transit in the 1840s, and was associated with a standard itinerary.It served as an educational rite of passage. Though primarily associated with the British nobility and wealthy landed gentry, similar trips were made by wealthy young men of Protestant Northern European nations on the Continent, and from the second half of the 18th century some South American, U.S., and other overseas youth joined in. The tradition was extended to include more of the middle class after rail and steamship travel made the journey less of a burden.The primary value of the Grand Tour, it was believed, lay in the exposure both to the cultural legacy ofclassical antiquityand theRenaissance, and to the aristocratic and fashionably polite society of theEuropeancontinent. In addition, it provided the only opportunity to view specific works of art, and possibly the only chance to hear certain music. A grand tour could last from several months to several years. It was commonly undertaken in the company of a knowledgeableguideortutor.The Grand Tour not only provided aliberal educationbut allowed those who could afford it the opportunity to buy things otherwise unavailable at home, and it thus increased participants' prestige and standing. Grand Tourists would return with crates of art, books, pictures, sculpture, and items of culture, which would be displayed in libraries,cabinets, gardens, anddrawing rooms, as well as the galleries built purposely for their display; The Grand Tour became a symbol of wealth and freedom.