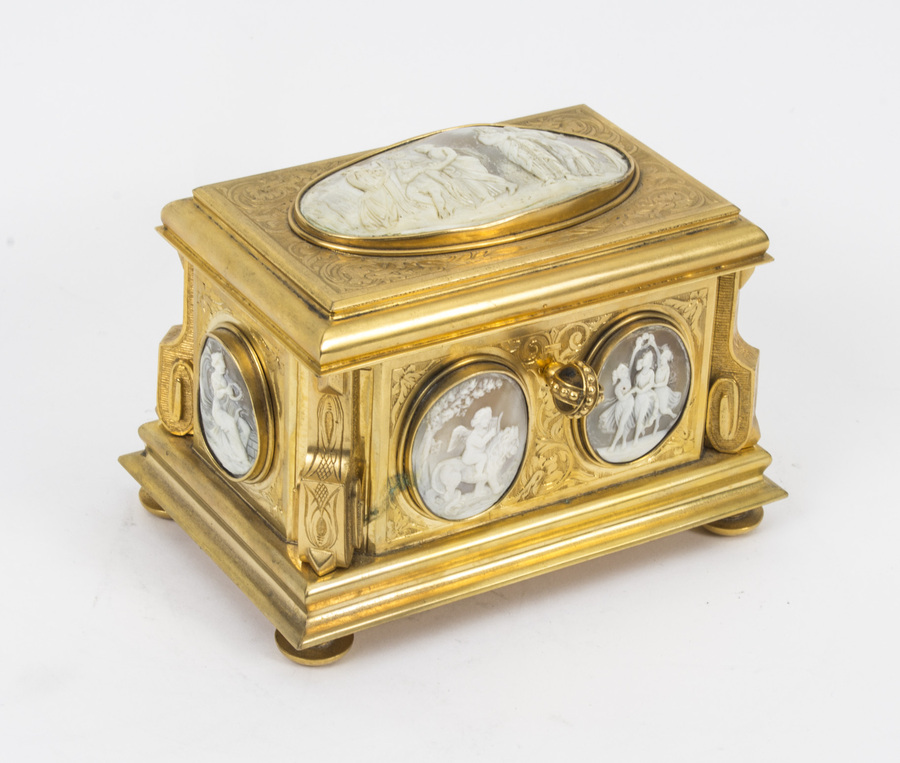 This is a beautiful antique French ormolu and carved cameo shell mounted jewellery casket, retailedby the renowned master cabinet maker, Tahanof Paris, and circa 1870 in date.

Of rectangular form, the hinged lid and sides are inset with mythological scenes and various classical figures. Complete with the original crown headed key, the lock plate engraved with the inscription "Tahan Paris, Boul des Italiens"It retains it original deep-buttoned burgundy silk lined interior and raised on decorativebun feet.There is no mistaking its absolutely unique quality and design, which is sure to make it a treasured piece for any discerning collector.Condition:In excellent original condition, please see photos for confirmation of condition.Dimensions in cm:Height 12 x Width 17 x Depth 12Dimensions in inches:Height 5 inches x Width 7 inches x Depth 5 inches
Our reference: 07770
Alphonse Tahan(1830-1880) -was the official ébéniste de l'Empereur or master cabinet maker to Emperor Napoleon III and his wife, the Empress Eugénie. Known for her beauty and impeccable taste, the Empress Eugene enjoyed the reputation as a trend setter and favored the workshop Tahan.Tahan Fabricant was located at 30 Rue de La Paix from 1849 and subsequently from 1878 at Boulevard des Italiens.The firm exhibited at The London Crystal Palace Exhibition in 1851 and the Paris Exposition Universelle in 1855, and on both occasions were awarded medals. His work exhibits such quality and is in high demand by collectors and enthusiasts alike. Not only did he produce furniture, but also small articles, such beautiful wooden boxes and fine bronze jewelry caskets.His son, Jean-Pierre-Alexandre Tahan continued the legacy of his father, and his business in Paris was celebrated for its imaginative, exhibition-quality work.Carved Cameo ShellAlthough occasionally used in Roman cameos, the earliest prevalent use of shell for cameo carving was during the Renaissance, in the 15th and 16th centuries. Before that time, cameos were carved from hardstone. The Renaissance cameos are typically white on a grayish background and were carved from the shell of a mussel or cowry, the latter a tropical mollusk.
In the mid 18th century, explorations revealed new shell varieties. Helmet shells from the West Indies, and queen conch shells from the Bahamas and West Indies, arrived in Europe. This sparked a big increase in the number of cameos that were carved from shells. Conch shells carve very well, but their colour fades over time.
After 1850 demand for cameos grew, as they became popular souvenirs of the Grand Tour among the middle class.
Cameo subjects
Classically the designs carved onto cameo stones were either scenes of Greek or Roman mythology or portraits of rulers or important dignitaries. In history, agate portrait cameos were often gifts from royalty to their subjects. These antique cameos, some more than 2000 years old, are either displayed in museums or are in private collections.