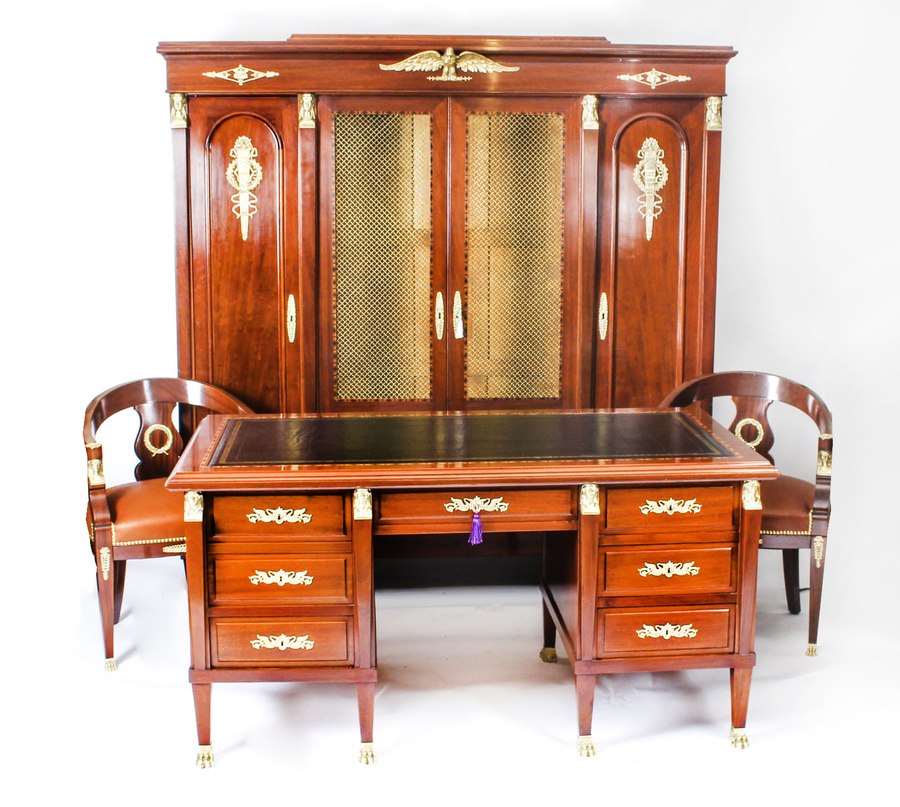 This is an antique French 2ndEmpire flamemahoganylibrary suite consisting of a finebookcase, a desk and a pair of armchairs with fabulous matching ormolu mounts, circa 1880 in date.

The stunning bookcase is decorated with ormolu mounts in typical Empire style.The pair of glazed doors enclose six adjustable shelves and the bookcasesits on beautiful ormolu lion's paw feet.The desks top has a striking gold tooled black leather inset writing surface which has a decorative geometric inlaid satinwood and ebony border around it.It features beautifully cast gilded ormolu mounts including angels, pharaonic herms above paw feet and swan escutcheons. It is further enhanced with male masks wearing nemes headress's on the sides, making it an incredibly imposing and impressive item of furniture.The pair of chairs feature an ormolu sphinx decorating each arm, are decorated with exquisite ormolu mounts consisting of laurel wreaths, rosettes and palmette mounts and are raised on ormolu feet.
The overstuffed seats have been reupholstered in a sumptuous tan leather.It is a lovely suite which will add sophistication to any library.Condition:In excellent condition having been beautifully cleaned, polished, waxed, releathered and reupholstered in our workshops, please see photos for confirmation.Dimensions in cm:Height 189 x Width 188 x Depth 45-BookcaseHeight 76 x Width 150 x Depth 80-DeskHeight 80 x Width 65 x Depth 55-Pair chairsDimensions in inches:Height 6 foot, 2 inches x Width 6 foot, 2 inches x Depth 1 foot, 6 inches-BookcaseHeight 2 foot, 6 inches x Width 4 foot, 11 inches x Depth 2 foot, 7 inches-DeskHeight 2 foot, 7 inches x Width 2 foot, 2 inches x Depth 1 foot, 10 inches-Pair chairs
Our reference: A1113B
Empire style,
is an early-19th-centurydesignmovement inarchitecture,furniture, otherdecorative arts, and thevisual artsfollowed in Europe and America until around 1830.The style originated in and takes its name from the rule ofNapoleon Iin theFirst French Empire, where it was intended to idealize Napoleon's leadership and the French state. The style corresponds to theBiedermeierstyle in the German-speaking lands,Federal stylein the United States and to theRegency stylein Britain. The previous style was calledLouis XVI style, in France.The Empire style was based on aspects of the Roman Empire. It is the second phase of neoclassicism which is also called "Directoire", after a goverment system.
Furniture typically had symbols and ornaments borrowed from the glorious ancient Greek and Roman empires.The furniture was made from heavy woods such asmahoganyandebony, imported from the colonies, with dark finishes often with decorative bronze mounts. Marble tops were popular as were Egyptian motifs like sphinxes, griffins, urns and eagles and the Napoleonic symbols, the eagle, the bee, the initials "I" and a large "N."
Gilded bronze (ormolu) details displayed a high level of craftsmanship.Flame Mahogany - Thomas Sheraton-18thcentury furniture designer, once characterized mahogany as "best suited to furniture where strength is demanded as well as a wood that works up easily, has a beautiful figure and polishes so well that it is an ornament to any room in which it may be placed." Matching his words to his work, Sheraton designed much mahogany furniture. The qualities that impressed Sheraton are particularly evident in a distinctive pattern of wood called "flame mahogany."The flame figure in the wood is revealed by slicing through the face of the branch at the point where it joins another element of the tree.Ormolu -(from French 'or moulu', signifying ground or pounded gold) is an 18th-century English term for applying finely ground, high-caratgoldin amercuryamalgamto an object ofbronze.The mercury is driven off in akilnleaving behind a gold-coloured veneerknown as'gilt bronze'.The manufacture of true ormolu employs a process known as mercury-gilding orfire-gilding, in which a solution ofnitrate of mercuryis applied to a piece ofcopper,brass, or bronze, followed by the application of anamalgamof gold and mercury. The item was then exposed to extreme heat until the mercury burned off and the gold remained, adhered to the metal object.No true ormolu was produced in France after around 1830 because legislation had outlawed the use of mercury. Therefore, other techniques were used instead but nothing surpasses the original mercury-firing ormolu method for sheer beauty and richness of colour.Electroplatingis the most common modern technique. Ormolu techniques are essentially the same as those used onsilver, to producesilver-gilt(also known asvermeil).