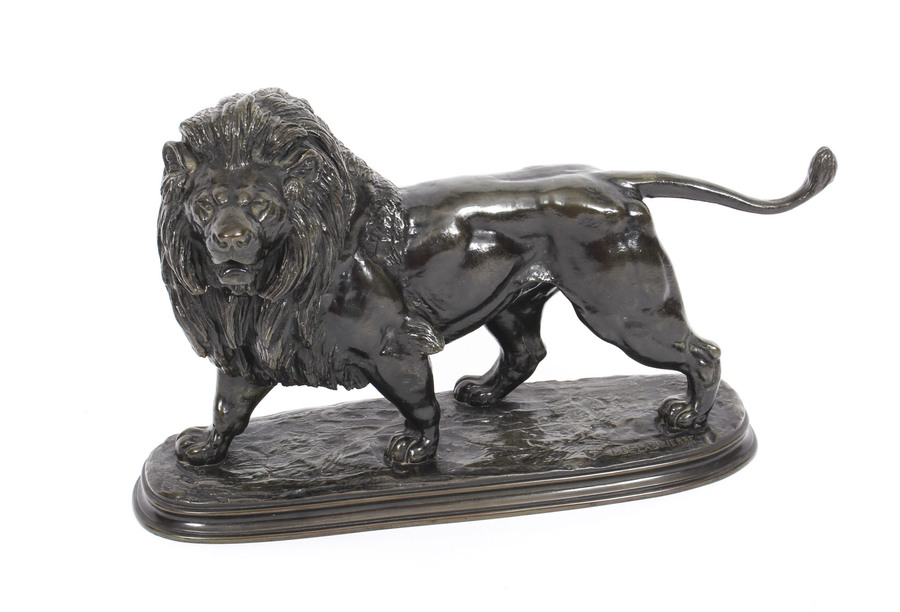 This is a truly magnificent antique French bronze sculpture of a pacing lion, by the noted French sculptor of the Animeliers school, Paul Edouard Delabrierre (1829 – 1912), circa 1870 in date.

This magnificent bronze sculpture features a striking lion pacing, his feet planted resolutely on the earth while being ready to attack, his face turned towards the viewer with his eyes emanating energy and concentration. All the glory of the animal comes through - the sculptor did everything to make the figure stand out in space, making the whole sculpture vivid and enjoyable.The bronze base is signed 'E. Delabrierre'.This high-quality hot cast solid bronze was produced using the traditional "lost wax" process, otherwise known as the "cire perdue" method.This is a splendid antique bronze sculpture of the Animalier school, which is sure to receive the maximum amount of attention wherever it is placed.
Condition:In excellent condition, please see photos for confirmation.Dimensions in cm:Height 30 x Width 47 x Depth 17Dimensions in inches:Height 1 foot x Width 1 foot, 6 inches x Depth 7 inches
Our reference: 09874
Paul-Édouard Delabrièrre(29 March 1829 – 1912) was a French animalier sculptor who worked in the mid-to-late 19th century and the early 20th century. He had 70 of his sculptures juried into the prestigious Salon art exhibition held annually in Paris. His monumental work calledL'Equitationadorns the facade of the Louvre.Delabrièrre was born in Paris, France, on 29 March 1829, the son of Louis Henri Delabrièrre and Marie Zoe Delabrièrre (née Chaffard). He first studied painting under the direction of Jean-Baptiste Delestre but ultimately became a sculptor instead. Little is known of Delabrièrre's life besides the work he left behind which exist in bronze, plaster, wax, and terra cotta.On 20 June 1868 he was married to Anne-Eugénie Alléon who had been twice widowed when her first two husbands, Émile Rubantel (a designer) and Claude Martin (a pawn broker), both died. She died 23 April 1878 in Paris.Delabrièrre was an important member of the animalier school who exhibited at the Salon from 1848 through 1882. His first two exhibits were typical of the style of his work throughout his career. He submittedGreyhound Holding a HareandWounded Deer. Most of his oeuvre were comparatively small models, however his larger pieces often incorporated figures. His work varies in style and quality with some models directly influenced by Antoine-Louis Barye who was the father of the animalier school.Delabrièrre's more popular realist bronzes were of impeccable quality and place him in the top echelon of his school. The facade of the Louvre incorporates one of his largest groups, the monumentalL 'Equitation, which depicts a horse and twoputti, one of whom is aboard the horse. It was completed by Delabrièrre in 1857 and installed that same year. In the final two years of his exhibiting career Delabrièrre experimented with iron as a worthy material for the Salon, although that idea did not go over well with collectors who were accustomed to bronzes. The works that were done in cast iron were produced by the art foundry Durenne Val Osne under the direction of Pierre Louis Rouillard. A list of Delabrièrre's 70 works presented at the Salon can be found in theDictionnaire des Sculpteursby Stanislas Lami.Versatility was one of Delabrièrre's strengths. The range of animals he sculpted covers nearly every large mammal to be found in continental Europe. He also did a few lion and panther sculptures during his career, as well as some camel and bird pieces, but his favorite subjects seemed to be dogs and big cats. He exhibited hisJavanese pantherin plaster at the 1857 Salon as well asTigre du Bengaleat the 1865 Salon. His repertoire also included some pieces executed in the orientalist genre. Delabrièrre used both the sand casting method and the lost wax method to create his sculptures.As early as December 1869 his sculptures had begun to be imported to the United States by the Philadelphia jewelry firm of J. E. Caldwell & Co. who had a store at 902 Chesnut Street. The store also advertised works by Jean-Louis Grégoire, Carrier, Moigniez, Mêne, and others. Delabrièrre portrayed realism in nearly all his sculptures. His circa 1870 bronze of a dog defecating took realism to an extreme level and was unusual if not outright strange. The subject matter was likely detrimental to the sales of the sculpture; however, it did possess certain qualities as a conversation piece. Bronzes by Delabrièrre and fellow animalier and countryman Jules Moigniez were popular in Britain and the United States in the late 19th century.Lost Wax Method
sometimes called by the French name of cire perdue or the Latin, cera perduta is the process by which a bronze or brass is cast from an artists sculpture.In industrial uses, the modern process is called investment casting. An ancient practice, the process today varies from foundry to foundry, but the steps which are usually used in casting small bronze sculptures in a modern bronze foundry are generally quite standardised.