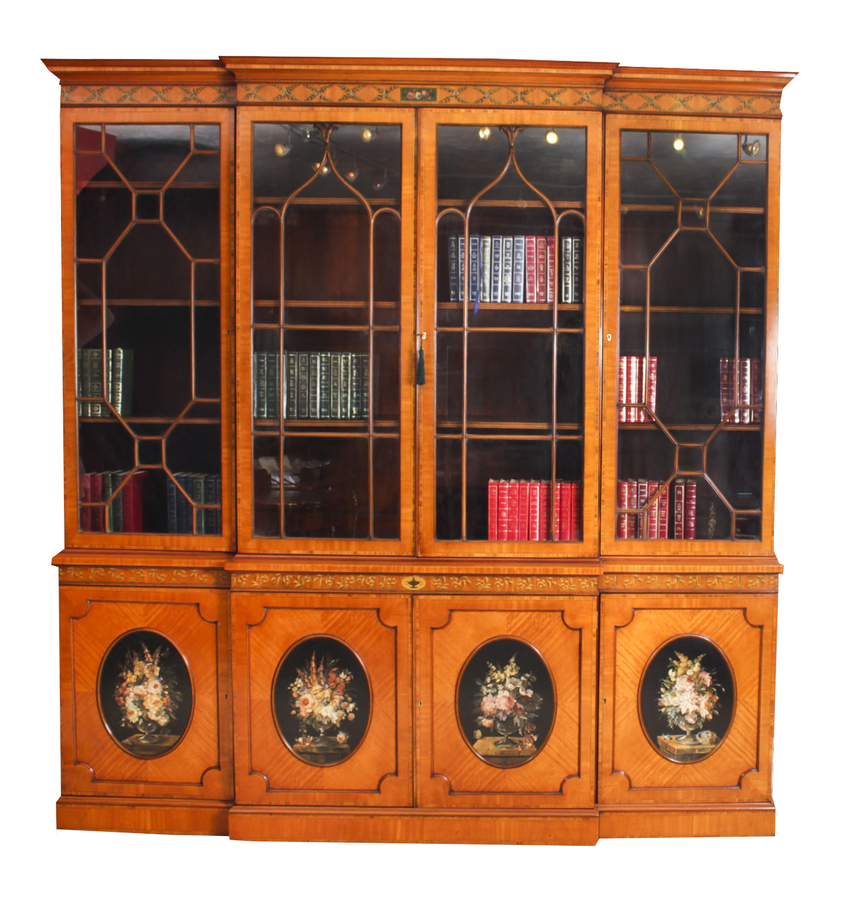 This is a beautiful antique Sheraton Revival top qualityfour door breakfrontbookcase, masterfully crafted in rich satinwood, Circa 1880 in date.

This magnificent bookcase features a frieze and cornice beautifully hand painted with scrolling floral leafage. The four astragal glazed top doors revealing adjustable shelves, the base with four doors hand painted with beautiful floral sprays in ebonised oval panels, and the doors opening to reveal spacious cupboards with central shelves.The mahogany shelves are all original and the back of the bookcase is also made from solid mahogany.Raised on a plinth base there is no mistaking its superb quality and very grand design, which is certain to make it a talking point in your home and stand proud in whichever room you choose to display it.
Complete with working locks and keys.
Condition:In excellent condition having been beautifully cleaned polished and waxed in our workshops, please see photos for confirmation.Dimensions in cm:Height 235 x Width 234 x Depth 52Dimensions in inches:Height 7 foot, 8 inches x Width 7 foot, 8 inches x Depth 1 foot, 8 inches
Our reference: A1544
Satinwood
is a hard and durable wood with asatinlikesheen, much used in cabinetmaking, especially inmarquetry. It comes from two tropical trees of the familyRutaceae(ruefamily). East Indian or Ceylon satinwood is the yellowish or dark-brown heartwood ofChloroxylonswietenia.The lustrous, fine-grained, usually figured wood is used for furniture, cabinetwork, veneers, and backs of brushes. West Indian satinwood, sometimes calledyellow wood, is considered superior. It is the golden yellow, lustrous, even-grained wood found in the Florida Keys and the West Indies.It has long been valued for furniture. It is also used for musical instruments, veneers, and other purposes. Satinwood is classified in the divisionMagnoliophyta, classMagnoliopsida, orderSapindales, familyRutaceae.Thomas Sheraton
(1751 - 1806) was an English cabinetmaker and one of the leading exponents ofNeoclassicism. Sheraton gave his name to a style offurniturecharacterised by a feminine refinement of late Georgian styles and became the most powerful source of inspiration behind the furniture of the late18thcentury. His four-partCabinet-Maker and Upholsterers' Drawing Bookgreatly influenced English and American design.Sheraton was apprenticed to a cabinetmaker, but he became better known as an inventor, artist, mystic, and religious controversialist. Initially he wrote on theological subjects, describing himself as a “mechanic, one who never had the advantage of collegiate or academical education.” He settled in Londonc.1790, and his trade card gave his address asWardourStreet, Soho.Supporting himself mainly as an author, Sheraton wroteDrawing Book(1791), the first part of which is devoted to somewhat naive, verbose dissertations on perspective, architecture, and geometry and the second part, on which his reputation is certainly based, is filled with plates that are admirable in draftsmanship, form, and proportion.In 1803 Sheraton, who had been ordained a Baptist minister in 1800, published hisCabinet Dictionary(with plates), containingAn Explanation of All Terms Used in the Cabinet, Chair and Upholstery Branches with Dictionary for Varnishing, Polishing and Gilding.Some of the designs in this work, venturing well into the Regency style, are markedly unconventional. That he was a fashionable cabinetmaker is remarkable, for he was poor, his home of necessity half shop. It cannot be presumed that he was the maker of those examples even closely resembling his plates.Although Sheraton undoubtedly borrowed from other cabinetmakers, most of the plates in his early publications are supposedly his own designs. The term Sheraton has been recklessly bestowed upon vast quantities of late18th-centurypainted and inlaid satinwood furniture, but, properly understood and used in a generic sense, Sheraton is an appropriate label recognizing a mastermind behind the period. The opinion that his lack of success was caused by his assertive character is hypothetical.