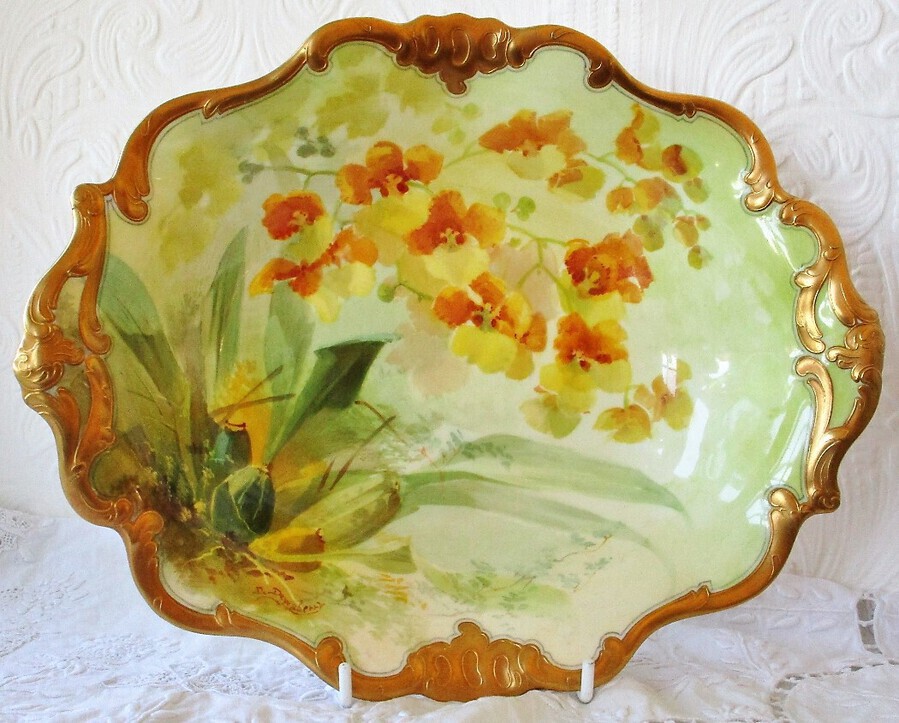 A fine and rare Early 20th Century Antique English Edwardian Royal Doulton Porcelain Lobed Cabinet Dish with heavily gilded border and footring, "Oncidium Forbesii"  painted by David Dewsberry, active at Doultons from 1889 to 1919, having joined the company after training under the Alcocks at the Hill Pottery, Burslem, and having won the first medal ever awarded to a student at the Wedgwood institute. Acknowledged as a master painter of orchids, he studied the plants in the conservatories of the Duke of Sutherland, Joseph Chamberlain and other orchid-growers. A great music lover, he conducted the Burslem Congregational Church choir for 33 years. The church remembered his “unstinted voluntary work which raised the standard of the musical portion of our services to a very high level”. His gravestone at Burslem Cemetery bears the words “gone to join the choir invisible”. This dish, an excellent example of his work in this genre, bears on the obverse the underlined signature of the artist, viz. "D. Dewsberry" , the reverse with the Royal Doulton puce printed backstamp as used from 1902 - 1922 following the granting of the Royal Warrant to the company in 1901, the title, "Oncidium Forbesi" { sic. }, painted in gold alongside the code RA2673.B., Ref. Robert Allen Design Studio ~ Pattern Numbers, and the pattern number C9975, Ref. Doulton ~ Pattern Numbers, this together with the barely legible impressed Date Code ** - 04 for 1904.