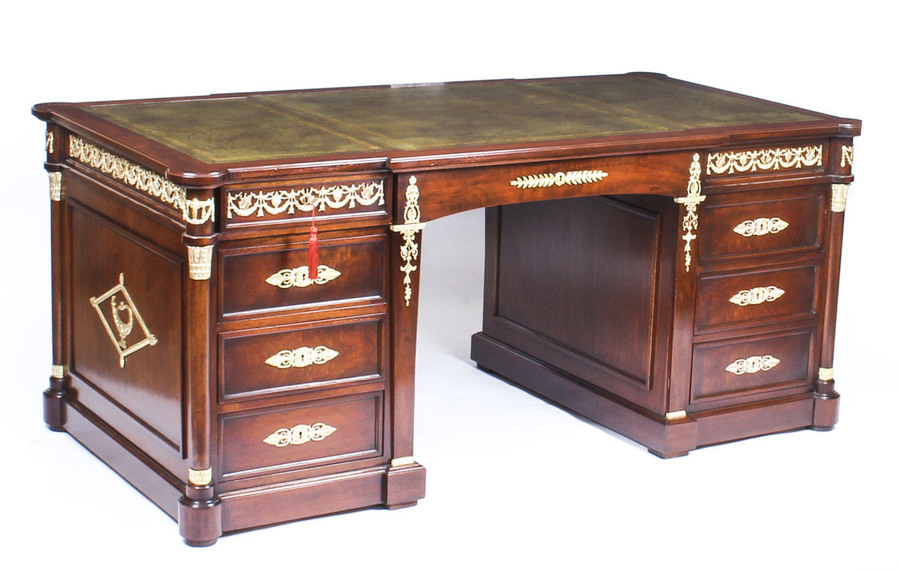 This imposing Empire Revival pedestal desk is mounted with fine ormolu neo-classical mounts including rosettes, escutcheons, palmettes, flaming torches and Roman lanterns, on finely figured mahogany.The desk has a round cornered rectangular top with an inset gilt-tooled leather writing surface above three frieze drawers flanked by anthemion ormolu mounts. There are a further three drawers in each pedestal and it is raised on plinth bases.The desk features ninedrawers for maximum storage, it is freestanding with a beautifully panelled back and comes complete with the original working locks and keys.This desk will soon become the centrepiece of your furniture collection, there is no mistaking the sophisticated quality and design and it is certain to enhance the style and elegance of any living area, bedroom, or reception.Condition:In excellent condition having been beautifully cleaned, polished, waxed and releathered in our workshops, please see photos for confirmation.Dimensions in cm:Height 79 x Width 180 x Depth 95Dimensions in inches:Height 2 foot, 7 inches x Width 5 foot, 11 inches x Depth 3 feet, 1 inch
Our reference: A1398
Empire style,is an early-19th-centurydesignmovement inarchitecture,furniture, otherdecorative arts, and thevisual artsfollowed in Europe and America until around 1830.The style originated in and takes its name from the rule ofNapoleon Iin theFirst French Empire, where it was intended to idealize Napoleon's leadership and the French state. The style corresponds to theBiedermeierstyle in the German-speaking lands,Federal stylein the United States and to theRegency stylein Britain. The previous style was calledLouis XVI style, in France.The Empire style was based on aspects of the Roman Empire. It is the second phase of neoclassicism which is also called "Directoire", after a goverment system.
Furniture typically had symbols and ornaments borrowed from the glorious ancient Greek and Roman empires.The furniture was made from heavy woods such asmahoganyandebony, imported from the colonies, with dark finishes often with decorative bronze mounts. Marble tops were popular as were Egyptian motifs like sphinxes, griffins, urns and eagles and the Napoleonic symbols, the eagle, the bee, the initials "I" and a large "N."
Gilded bronze (ormolu) details displayed a high level of craftsmanship.
Flame Mahogany
Thomas Sheraton-18thcentury furniture designer, once characterized mahogany as "best suited to furniture where strength is demanded as well as a wood that works up easily, has a beautiful figure and polishes so well that it is an ornament to any room in which it may be placed." Matching his words to his work, Sheraton designed much mahogany furniture. The qualities that impressed Sheraton are particularly evident in a distinctive pattern of wood called "flame mahogany."The flame figure in the wood is revealed by slicing through the face of the branch at the point where it joins another element of the tree.